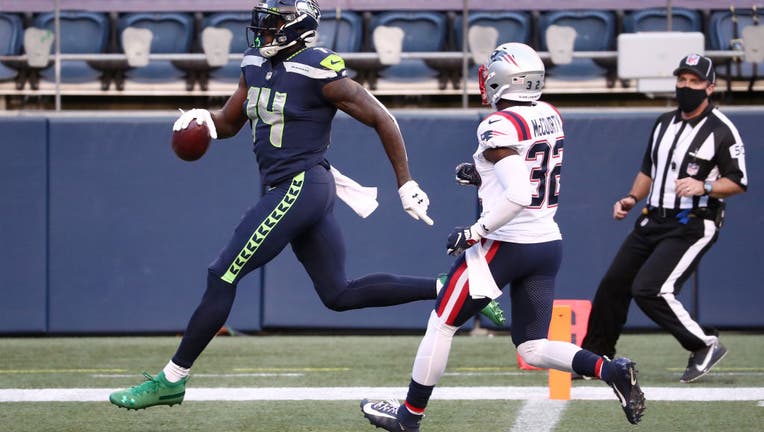 SEATTLE - Cam Newton was stopped at the 1-yard line on the final play and the Seattle Seahawks held off the New England Patriots 35-30 on Sunday night.

Newton and the Patriots reached the 1 on a pass to N’Keal Harry with 3 seconds left. On the final play, Newton tried to run power to the left, but was upended by L.J. Collier in the biggest play of his young career. Newton, who had two rushing touchdowns in the game, never got close to the goal line and Seattle’s sideline erupted in celebration.

Newton was excellent in his first road game with the Patriots throwing for 397 yards, one touchdown and one interception. He ran for another 47 yards, but couldn’t get the last three feet to give New England a victory.

Wilson was masterful on the other side, completing 21 of 28 passes for 288 yards. It was his fourth career game with five touchdown passes.

Carson was the last, running under a 18-yard rainbow toss from Wilson against the blitz with 4:32 left to give the Seahawks a 35-23 lead.

But Newton wasn’t done. His second TD run pulled New England to 35-30 with 2:16 left. It was his eighth career game with at least two rushing TDs, setting an NFL record.

New England held the Seahawks to a three-and-out after Seattle threw on third-and-1 and Wilson couldn’t connect with Lockett on a deep shot.

Newton needed just five plays to move New England from its 19 to the Seattle 36 with 41 seconds left. After a penalty, Newton hit Edelman for 18 yards to the Seattle 13 with 20 seconds left and the pair nearly connected again in the end zone but Newton’s pass was high with 9 seconds remaining. Newton found Harry but was stopped at the 1 and New England used its final timeout, setting the stage for the final play.

Wilson became the first QB in Seahawks history to throw at least four TDs in consecutive games after he had four TD tosses in Week 1 against Atlanta.

It was the kind of performance that in a normal setting would have left CenturyLink Field shaking with delirium. But the stadium built for noise was empty due to the COVID-19 pandemic, leaving fans to celebrate Seattle improving to 2-0 for the second straight year at home.

New England played without running back James White after his father was killed Sunday in a car crash in Florida, authorities said. The wreck that killed Tyrone White happened around 1 p.m. in Cooper City, Florida, the Broward County Sheriff’s Office said in a news release. White, who was the captain of the Miami-Dade Police Department, was pronounced dead at the scene.

Seattle lost its starting and backup free safeties in the first half. Starter Quandre Diggs was ejected late in the first quarter for a helmet-to-helmet hit on New England’s N’Keal Harry. On fourth-and-3 from the Seattle 30, Newton hit Harry on a slant for 13 yards. The rookie was immediately hit by Diggs in a violent collision that snapped Harry’s head backward. The penalty helped lead to Newton’s 1-yard TD run.

Diggs was the first Seattle player ejected since 2017 when Sheldon Richardson and Quinton Jefferson were both ejected in a loss at Jacksonville.

Marquise Blair moved from nickel cornerback to safety in place of Diggs, but left with a right knee injury in the second quarter. Blair had to be helped off the field and the team immediately ruled him out. Lano Hill took over at free safety with Blair out.