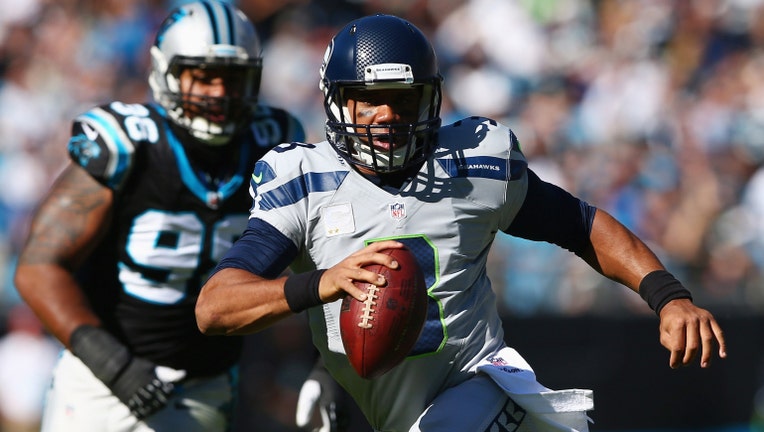 CHARLOTTE, NC - OCTOBER 26: Russell Wilson #3 of the Seattle Seahawks scrambles from the Carolina Panthers defense in the 3rd quarter during the game at Bank of America Stadium on October 26, 2014 in Charlotte, North Carolina. (Photo by Streeter Leck

CHARLOTTE, N.C. – Another sloppy game for the Seahawks, but they managed to hold off the Panthers 13 – 9 Sunday thanks to a late drive led by the one-and-only Russell Wilson.

Seattle’s offense was off to another slow start this week with back-to-back 3-and-outs.

On the plus side, the defense managed to hold the Panthers in the red zone to two field goals in the 1st half -- giving Carolina the early 6 – 0 lead. It could have been much worse...

Later, Steven Hauschka made a team record 58-yard field goal to put the Hawks on the board.

After a fumble recovery by Cliff Avril, the Seahawks went on a promising 77-yard drive before the end of the 1st half, but Marshawn Lynch dropped a pass at the goal line and the pass was intercepted by the Panthers. 6 – 3 at halftime.

In the 3rd quarter, Cam Newton’s short pass was intercepted by Marcus Burley at the Seattle 36 for a 24-yard return.

But the Hawks couldn’t put a TD on the board. They settled for a short 28-yard field goal from Hauschka to tie the game at 6.

The Seahawks only pegged 3 points on those two interceptions.

Later, more trouble for the Hawks. Russell Wilson fumbled at the Carolina 34 on a handoff, but recovered the ball.

Two plays later, another fumble -- this time recovered by Carolina. Fortunately for the Hawks, the Panthers went on to punt.

Late in the 4th, the Panthers were backed up inside their own 10-yard line. That’s when Kelvin Benjamin made an amazing 51-yard catch right in between Richard Sherman and Earl Thomas.

But you can never count out Russell Wilson.

Russell Wilson aired it out to Luke Willson for the 23-yard go-ahead touchdown. Hawks led 13 – 9 with 0:47 left in the game.

Seattle’s defense stepped up and held the Panthers. They turned the ball over on downs with 0:20 left and the Seahawks took a knee.