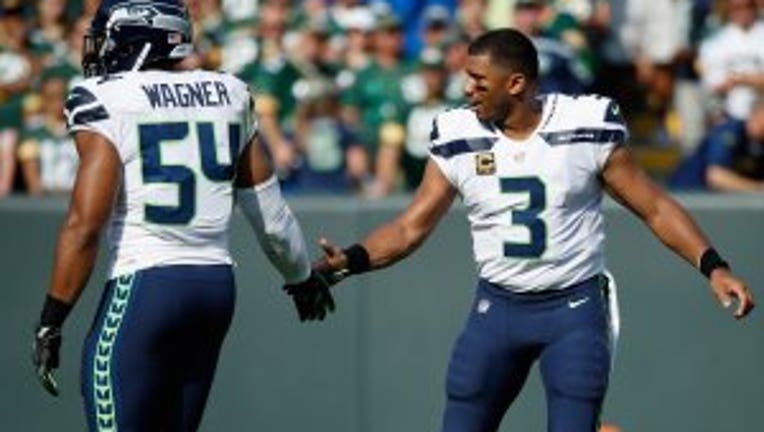 Wilson #3 high fives Bobby Wagner #54 of the Seattle Seahawks during the first half against the Green Bay Packers at Lambeau Field on September 10, 2017 in Green Bay, Wisconsin. (Photo by Joe Robbins/Getty Images)

SEATTLE – Two of the Seattle Seahawks’ top athletes have been selected for the 2020 Pro Bowl.

The NFL named Russell Wilson and Bobby Wagner as starters in the roster on Tuesday. It’s the sixth time Wagner has been selected for the game and Wilson’s seventh in an eight-year career.

The two, along with K.J. Wright, are the longest tenured Seahawks and have been mainstays throughout the team’s remarkable success that's lasted nearly a decade.

On top of the honor, Wilson is among the top candidates for league MVP along with Ravens quarterback Lamar Jackson. Meanwhile, Wagner is the team’s selection for the Walter Payton NFL Man of the Year Award for his on-the-field leadership and contributions to charity.

Seattle (11-3) is in the middle of its best season since its Super Bowl championship and secured a playoff spot last Sunday.

The 2020 Pro Bowl will be played on Sunday, January 26 at Camping World Stadium in Orlando, Florida.