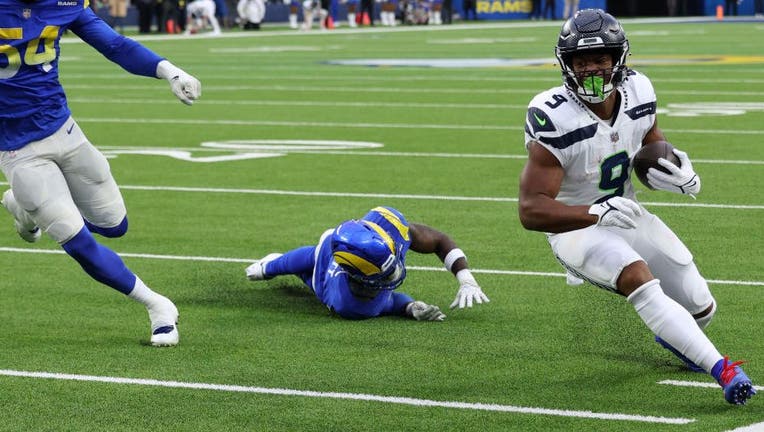 INGLEWOOD, CALIFORNIA - DECEMBER 04: Kenneth Walker III #9 of the Seattle Seahawks carries the ball against the Los Angeles Rams during the first half at SoFi Stadium on December 04, 2022 in Inglewood, California. (Photo by Harry How/Getty Images)

RENTON, Wash. - The Seattle Seahawks are working through a trio of injuries to the running back position that leave them somewhat shorthanded coming out of Sunday’s win over the Los Angeles Rams.

Ken Walker III and DeeJay Dallas each sustained ankle injuries in the victory while Travis Homer was unable to play due to a knee injury and an illness.

Tony Jones Jr. is the only healthy running back currently on the team's 53-man roster with Darwin Thompson and Godwin Igwebuike on the practice squad.

"There's gonna be some questions about how the guys make it back and let's wait and see how it goes," head coach Pete Carroll said on Monday.

Walker left the game early in the second quarter and was unable to return to action. Carroll said that Walker "jammed" his ankle and said it’s an unusual injury. However, on his radio show on Seattle Sports 710 Monday morning, Carroll said there is a chance Walker could play this week.

"It's an unusual injury. I've never heard of this," he said. "It's a little space that's just aggravated in the inside of his ankle that we've got to just help him, just do everything we can to get him back, see if he can come back and play.

"He's got an area of his ankle that sort of jammed and so there's some strained tissue in there, but it's not an ankle sprain," he added to reporters Monday afternoon. "It's not a high-ankle sprain. It's not a lateral ankle sprain like we normally report on. It's different than that."

Dallas was then sidelined with an ankle sprain before halftime as rushing duties fell to Jones, who had not seen any offensive snaps with the team since being claimed off waivers from the New Orleans Saints in October. However, Jones would take a big hit early in the third quarter that necessitated Dallas going back in the lineup sparingly the rest of the game. Jones would ultimately be fine to continue after evaluations.

Carroll said Dallas could have a high-ankle sprain but they were still evaluating the injury as of Monday afternoon.

Homer has a knee sprain that limited his availability last week in addition to being among the hardest hit players on the team with the illness that swept through the locker room. Carroll said they won’t know if he’ll make it back until they get into practices this week and see how he responds.

"It’s really the knee that we’re trying to take care of," Carroll said.

When asked if Seattle needed to go in search of more help at the position, Carroll said it's status quo for the moment.

"We've got a couple guys on the practice squad that are available to us. And so we'll figure it out with what we got at this point," he said.

Rashaad Penny told FOX 13's Ian Furness on Sunday night that he believes he has a good chance of making it back to the roster at the end of the season should the team make it into the playoffs. Penny sustained a fractured fibula in the loss to the Saints that preempted the claim of Jones. However, Carroll said Penny is not currently close to a return.

"You have to love his optimism," Carroll said. "He hasn’t run yet. Who knows what is going to happen? He’s still a ways from getting back. He felt really good about the process that he is in right now, and that’s a good sign."

Outside of the running back position, safety Ryan Neal has a sore knee after landing hard on the synthetic turf at SoFi Stadium on Sunday. However, Neal is optimistic he'll be able to play again this week against the Carolina Panthers.

"His knee is still sore. I talked to him about it, and we are going to have to wait and see what happens, but he feels like he will be able to get back," Carroll said.