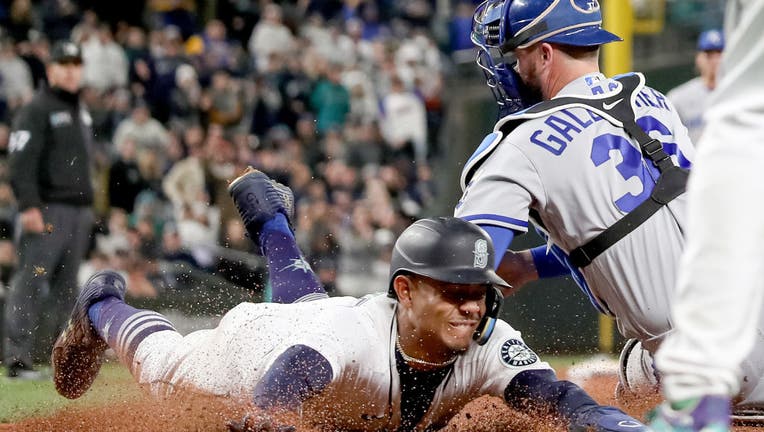 SEATTLE, WASHINGTON - APRIL 23: Julio Rodriguez #44 of the Seattle Mariners scores a run against the Kansas City Royals during the seventh inning at T-Mobile Park on April 23, 2022 in Seattle, Washington. (Photo by Steph Chambers/Getty Images)

KANSAS CITY, Mo. - The Kansas City Royals begin a three-game series at home against the Seattle Mariners on Friday.

Friday's game is the fourth meeting between these teams this season.

Royals: Bobby Witt Jr. has a .254 batting average to rank second on the Royals, and has 29 doubles, six triples and 20 home runs. Salvador Perez is 14-for-39 with two home runs and seven RBI over the past 10 games.

Mariners: Julio Rodriguez has 23 doubles, three triples and 27 home runs. Ty France is 8-for-36 with a double, a triple, two home runs and seven RBI over the last 10 games.

The first pitch happens at 5:10 p.m. PT on Friday in Kansas City, Missouri.