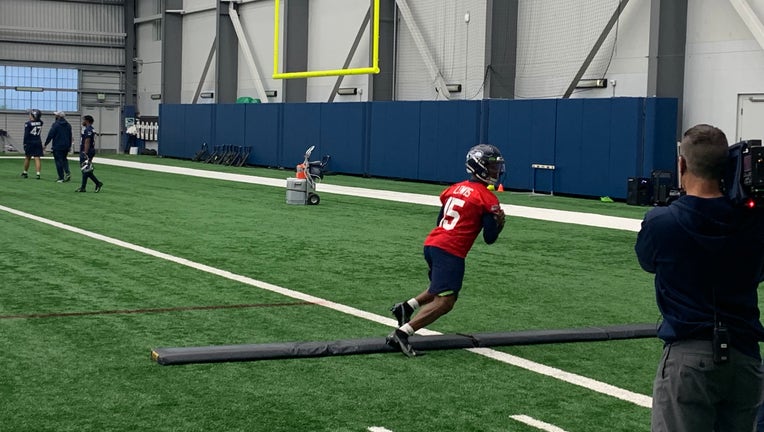 Seahawks quarterback Levi Lewis works through drills during practice at the team's rookie mini-camp on May 6, 2022 at the Virginia Mason Athletic Center. (photo by Curtis Crabtree / FOX 13 Seattle)

RENTON, Wash. - The first practice for the new rookie class for the Seattle Seahawks is now in the books. After three days of work at the Virginia Mason Athletic Center, the rookies will now be able to join their veteran teammates moving forward.

The rookie camp this week was limited only to draft picks, undrafted free agent signings, a plethora or tryout players, and returning veterans without any accrued NFL service time, which mostly covers previous practice squad players. It's a chance for the younger players to get some more foundational coaching and 1-on-1 time with their new coaching staff as they look to get up to speed in the NFL.

Louisiana-Lafayette signee Levi Lewis and Western Michigan tryout Kaleb Eleby handled the quarterback position for Seattle since Geno Smith, Drew Lock and Jacob Eason are all ineligible to participate. With the large majority of players involved trying to learn everything at the same time, the practices were pretty rudimentary.

First-round pick Charles Cross lined up at left tackle with third-round choice Abe Lucas handling the right tackle spot. Cornerback Tariq Woolen was unable to participate due to a minor hamstring strain and defensive end Tyreke Smith was held out the final two days of practice as well.

Speaking of the two tackles, they were probably the biggest note of the three days of camp.

With neither Duane Brown or Brandon Shell back under contract with Seattle, the Seahawks are going younger at their tackle spots. Cross and Lucas are joining Jake Curhan, Stone Forsythe and Greg Eiland as the tackles on the Seahawks' roster. All five players are in either their first or second year in the NFL.

Cross and Lucas are both looking to make the jump from "Air Raid" offenses that called for heavy passing numbers and very little time in a three-point stance. However, Carroll doesn't think it will be a challenge for either player to make the adjustments required.

"They’ve been working hard at it, they look very comfortable, and they’ll get better," Carroll said on Friday. "I saw a couple of flinches and stuff, which is really normal, but like I said, these guys are too good athletically. They are really comfortable in their bodies, they can move, they are well proportioned, they are quick, and they can run fast for big guys. It’s just not going to be a big transition like we might think, and I don’t think that the experience of being in the offense that they’ve been in is going to be a detriment at all."

"I was so caught by the draft picks," he said Sunday. "I thought everybody was able to show something, and the tackles jumped out right off the bat. Both guys look well-equipped, physically. They look like they can move like we would hope they can move. They're both bright kids, and will pick up their stuff, so the process is underway. I was really fired up about that.

In addition to making a change at coordinator, the Seahawks added Sean Desai and Karl Scott to their defensive coaching staff this offseason.

Desai joins the team after previously serving as defensive coordinator of the Chicago Bears. Scott spent last year coaching defensive backs with the Minnesota Vikings after an extended stay with the University of Alabama.

"These guys are doing a marvelous job," Carroll said Sunday. "I'm really impressed. I will say that forever on these guys. Their command of what we're doing and their attention to the process, the teaching process, is really something. We're teaching differently than we have. Just the way we're breaking things down, and part of our own method, take you right back to objective behavior, and trying train guys how to learn stuff, and so it's good stuff."

Desai joined as an associate head coach for defense to help new coordinator Clint Hurtt as Seattle shifts its defense toward more 3-4 philosophies. Scott replaces Andre Curtis, who was let go as defensive passing game coordinator along with coordinator Ken Norton Jr. after the end of the season.

Former Seahawks linebacker K.J. Wright said last week that he wanted to return to the team to finish out his career.

"I want to go back home," Wright said on the "Half-Forgotten History" podcast last week with Trey Wingo. "I think it’s that simple. Seattle knows that I want to come back. They know how much they mean to me."

Carroll was asked about Wright's comments on Sunday and if they would be open to such a reunion.

While the door doesn't appear to be closed completely, the Seahawks appear set to move forward with Jordyn Brooks and Cody Barton as their two off-ball linebackers. Additionally, undrafted free agent Vi Jones was issued the No. 50 for rookie mini-camp.

"He looks the part," Carroll said of Jones. "He's quick and really athletic. He's got a good general background of what he's played, and you can see, he's got a lot of athleticism. He's really fast, really fits the bill. One of the guys that wasn't the draft picks that I totally picked up on, was excited to see him, and you can picture, he could be a special teamer. He could play a little bit outside, play a little inside backer for you, if you need him to, and he'll be able to match up with guys. So he had a good camp. A really good camp."

While numbers can obviously be changed, the Seahawks appear as though they are content with their plan at the position for the moment. 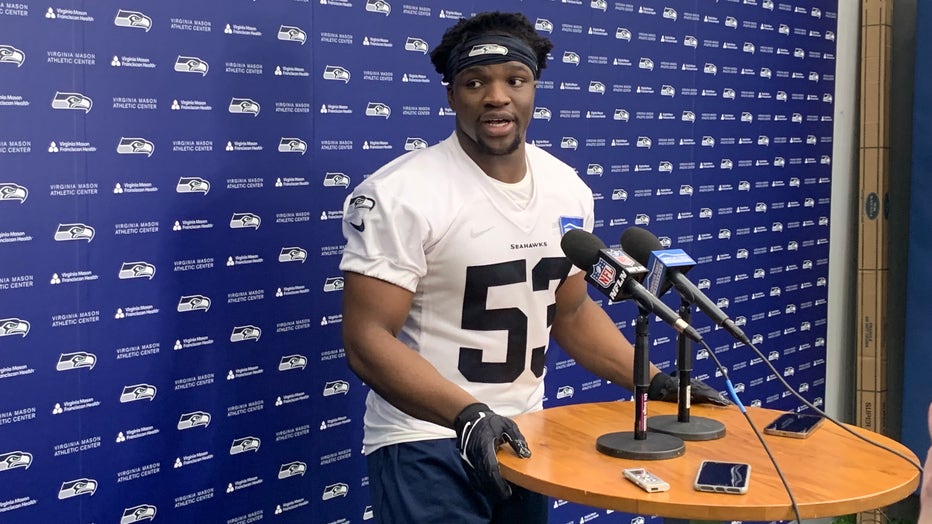 Seahawks defensive end Boye Mafe speaks with reporters after practice during the team's rookie mini-camp practice on May 6, 2022 at the Virginia Mason Athletic Center. (photo by Curtis Crabtree / FOX 13 Seattle)