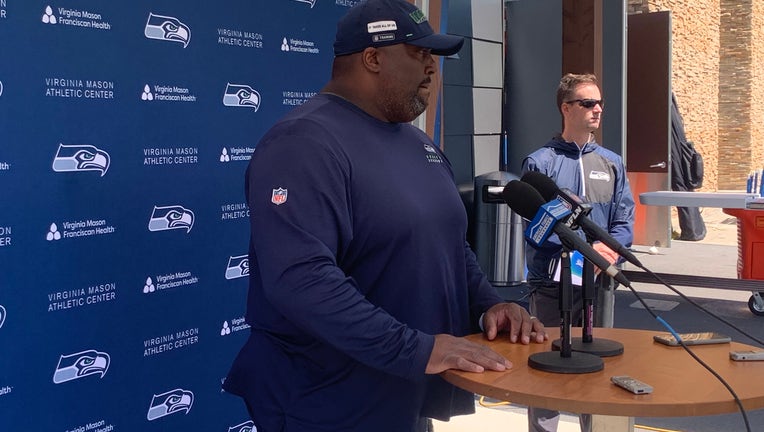 Seahawks defensive coordinator Clint Hurtt speaks with reporters after a practice at the Virginia Mason Athletic Center on May 31, 2022.  (photo by Curtis Crabtree / FOX 13)

RENTON, Wash. - Considering the fact that Seattle Seahawks defensive coordinator Clint Hurtt referred to the depth of their offseason practices as "underwear Olympics," it would be wise not to read too much into early impressions of the team's rookie class.

"We don't make decisions till we get pads on," Hurtt said on Tuesday.

Pads won't come on for the Seahawks until training camp in late July. Organized team activities, the voluntary workouts the team is going through right now, were called "fake football" by head coach Pete Carroll last week as well. Players aren't in pads. Contact is extremely limited during this stage of the offseason.

There's a reason opinions and impressions are subject to change when actual football can commence. But there are still some things that can carry into training camp and preseason games. But with that disclaimer in place, early returns on rookie cornerbacks Coby Bryant and Tariq Woolen have been positive.

Bryant, a fourth-round pick and reigning Jim Thorpe Award winner, is the more polished and pro-ready of the two. Woolen, a former wide receiver, is an athletic unicorn that is still raw as a prospect.

"They've really risen to the challenge, especially getting out with the veteran groups and really trying to go show what they have, and what they can help bring to our defense, because these guys are gonna be a big part of it," Hurtt said after Tuesday's practice. "So that part has been really exciting to see with Coby and Tariq and [Boye] Mafe, really all of them have done really, really well. So you'll see them continue to progress more but their competitive nature, their work ethic, their attention to detail, how they are in meetings. They're carrying themselves not like the typical rookies where you see the immaturity and things like that. That has not been them. They've been really, really good so far."

Woolen was unable to take part in the team's rookie mini-camp earlier this month. He's since been able to get on the field over the last week. Bryant missed a couple of days due to a personal matter. But even with the absences, both players have already made a mark.

Safety Ryan Neal spoke glowingly about both after Tuesday's practice.

"I know Coby is going to be very competitive," Neal said of Bryant. "I can see it already in how he moves, how he runs. I can already tell he has great ball skills. And I can already tell he's going to be a dog. You've got to think, starting across from Sauce Gardner (No. 4 overall pick by the Houston Texans) and no one's mentioning your name kind of puts a chip on your shoulder and he definitely showed that by balling out. And it's just funny that no one really talked about him. I was like dude, he was literally shutting down (receivers) just like Sauce was."

Gardner was the more highly-touted pro prospect. However, Bryant was the one that earned the Thorpe Award as the nation's best defensive back in college.

Bryant was a four-year starter for the Bearcats. He finished his career with 172 total tackles, 10 interceptions, 45 passes defended and five forced fumbles.

Meanwhile, Woolen ran the 40-yard dash in 4.26 seconds at the NFL Combine in February, which is the fifth-fastest time ever. Oh, and he did so at 6-foot-4 and 205 pounds.

"Tariq? I mean freak," Neal said of Woolen. "Go-go gadget arms. Dude can touch you from standing over here. You know what I mean? Every time I look on the film, I'm just like dude. I'm tall. You know what I mean? Like, and I'm looking up like, god that dude is huge. So, I mean, just seeing his physical capabilities. It's just like, man, you really pray and you hope and you're on his ass because you want him just to learn how to put all that together and just be able to use that that that athletic ability he's got.