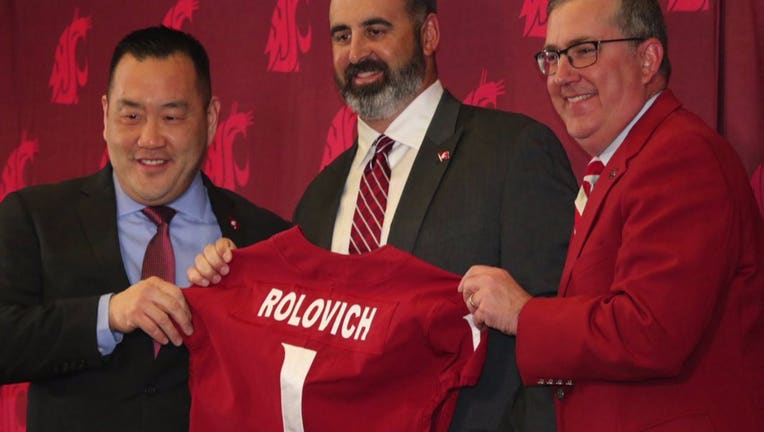 Nick Rolovich will be making his home debut when Washington State hosts No. 11 Oregon on Saturday.

He’s already gotten the Cougars off to a good start with a couple of other “firsts.”

Rolovich became the first Washington State head coach to win his debut on the road since Warren Powers in 1977 when the Cougars opened the conference-only season with a 38-28 win at Oregon State last weekend.

The Cougars (1-0) were led by quarterback Jayden de Laura, the first true freshman to start a season opener in program history. He threw for 227 yards and two touchdowns and ran for another.

As with the other Pac-12 programs, the Cougars won’t have any fans on hand to see what they do for an encore. Instead, there will only be some cardboard cutouts in the stands.

“Of course, we would want all our fans there,″ Rolovich said.

The Cougars will be facing a Ducks team that used a strong running attack to churn out their own season-opening win over Stanford.

CJ Verdell, the Pac-12′s top returning running back with 1,220 rushing yards last season, had 20 carries for 105 yards. He pounded Washington State for 257 rushing yards, more than 300 all-purpose yards, and three touchdowns a year ago.

Sophomore quarterback Tyler Shough threw for 227 yards and a touchdown and wasn’t sacked against Stanford. He also rushed for 85 yards. Afterward, he received a text from former Oregon quarterback Justin Herbert, who is now leading the NFL’s LA Chargers.

“He texted me after the game: good job,” Shough said. “It’s good to have that connection still there.″

“We didn’t really plan on running him that much, but he ended up running the ball a few more times and was really effective,″ Cristobal said. ”Fairly accurate. Created explosive plays, which certainly helped generate points, and that’s probably the best we’ve done offensively against Stanford in a long time. So he’s growing, he’s learning.″

The Cougars played last week without injured running back Max Borghi, one of their best players, and Borghi’s status is unclear for this game. Rolovich didn’t update the player’s status this week.

He also declined to give details of why the Cougars were down more than 30 players when they faced the Beavers. It was not clear why those players were not available. Washington State did report one case of COVID-19 among football players this week.

“I don’t want to get into that,″ Rolovich said, but added he expected some of those players to be in action Saturday.

Oregon will be without starting safety Verone McKinley during the first half against Washington State after McKinley was called for targeting against Stanford.

The Ducks trailed 35-34 with a minute left against Washington State last year. But Mykael Wright returned a kickoff 36 yards and four consecutive pass completions from Justin Herbert put Oregon in field goal range. Camden Lewis kicked a 26-yard field goal at the buzzer to secure a 37-35 win for an Oregon team that won the Pac-12 championship and beat Wisconsin in the Rose Bowl.

Washington State passed for just 227 yards against Oregon State while rushing for 229 yards. It’s the first time in a decade the Cougars finished a game with more rushing yardage than passing yardage. That never happened in the Mike Leach era of the Air Raid when they passed on most downs. The last time the Cougars had more rushing yards in a game was in 2010, when a rushing attack led by quarterback Jeff Tuel and running back James Montgomery piled up 221 yards in a 31-14 victory over Oregon State.