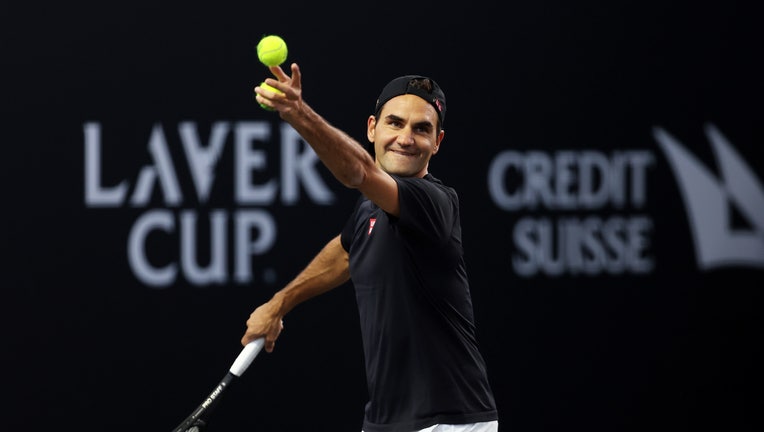 Roger Federer of Team Europe plays a shot during a practice session on the practice court during Day One of the Laver Cup at The O2 Arena on September 23, 2022 in London, England. (Photo by Julian Finney/Getty Images for Laver Cup)

LONDON - This day, this match, had to come, of course, for Roger Federer, and for tennis, just as it inevitably must for every athlete in every sport.

Federer was bidding farewell Friday night with one last contest before he heads into retirement at age 41 after an illustrious career that included 20 Grand Slam titles and role as a statesman for tennis. He was scheduled to play a doubles match alongside his rival Rafael Nadal for Team Europe in the Laver Cup against Frances Tiafoe and Jack Sock of Team World.

"For me, just personally, (it was) sad in the first moment, when I came to the conclusion it’s the best decision," Federer said in an interview with The Associated Press this week about his emotions when realizing it was time to go. "I kind of held it in at first, then fought it off. But I could feel the pain."

When the players from both squads were introduced before the initial singles matchup of the three-day team event at the O2 Arena, Federer was the last to emerge from a tunnel leading out to the black court, wearing his team's blue zip-up jacket and black pants. Fans who were loud enough for Nadal, Novak Djokovic, Andy Murray and others really let Federer hear their support and gratitude, rising for a lengthy standing ovation while lifting their phone cameras to capture the moment.

When there were breaks in the action during the matches before his, Federer wandered over to the stands and signed autograph after autograph — on programs, tennis balls, whatever was thrust his way by spectators.

"The crowd was electric," Sock said after losing the opening singles match Friday afternoon to two-time 2022 Grand Slam runner-up Casper Ruud 6-4, 5-7, 10-7. "I can only imagine what it’s going to be like for the rest of the weekend. And obviously tonight with ... two of the ‘GOATs’ playing together."

In the second match — which was briefly interrupted when an environmental protester made it on to the court and lit his arm on fire before being carried away by security guards — Stefanos Tsitsipas beat Diego Schwartzman 6-2, 6-1 to put Team Europe ahead 2-0.

Those lucky enough to have tickets came from all over, no distance too far to travel, no expense too great. 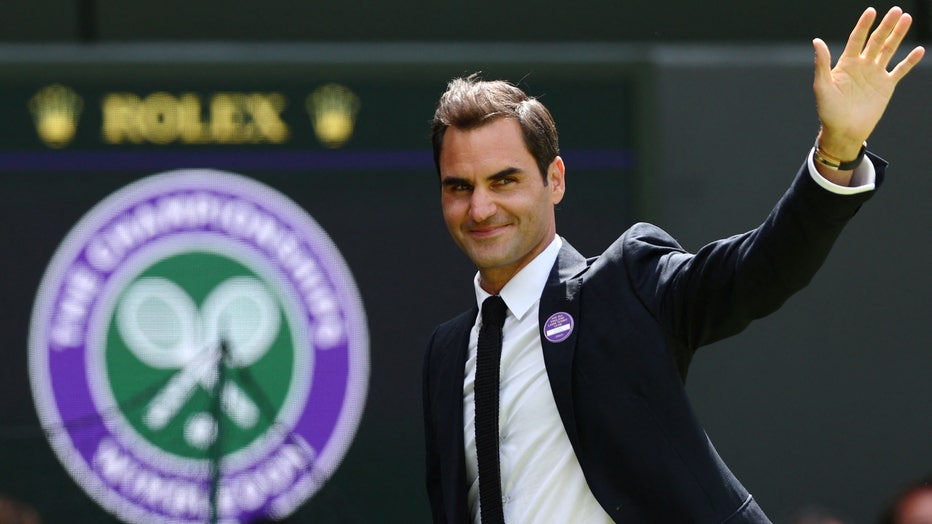 She came with her daughter, Anushka Verma, a 19-year-old student at University of California, Berkeley, for what they said was their first time to watch tennis live. Both wore blue hats for the occasion, Maitra's with Federer's "RF" insignia, Verma's with Nadal's bull horns logo.

There were lines hundreds of people deep at the "Game, Set, Merch" shops in and outside the venue. Jacob Benaion, a 61-year-old from Brazil, said he waited for more than an hour with his son, 32-year-old Moyses.

"I love tennis. My first favorite was Ivan Lendl. After that, Pete Sampras. And after that, Roger Federer. And Roger Federer is the best one of all," Benaion said. "He is a legend and he helped tennis grow around the world. He is an ambassador of tennis."

This goodbye follows that of Serena Williams, the owner of 23 major singles championships, at the U.S. Open three weeks ago after a third-round loss. It leaves questions about the future of a game he and she dominated, and transcended, for decades.

One key difference: Each time Williams took the court in New York, the looming question was how long her stay would endure — a "win or this is it" prospect. Friday IS it for Federer, no matter the result.

The Laver Cup, which is in its fifth edition, was founded by Federer's management company and uses a format quite different from a standard tournament. So a victory for him and Nadal would not mean advancing to another round.

Instead, Federer made clear that his surgically repaired right knee — the last of three operations came shortly after a loss in the Wimbledon quarterfinals in July 2021, which will go down as his final official singles match — is in no shape to allow him to continue, and he will not compete beyond Friday.

"It will be awesome to see Roger back on court. No one really knows what to expect physically from him, where he’s at, but ... we'll enjoy every minute of it," Sock said. "Give him a big hug at the end, win or lose."

Just before Ruud vs. Sock began, Federer rose from a black couch just off the sideline and walked over to offer Ruud a pat on the shoulder. 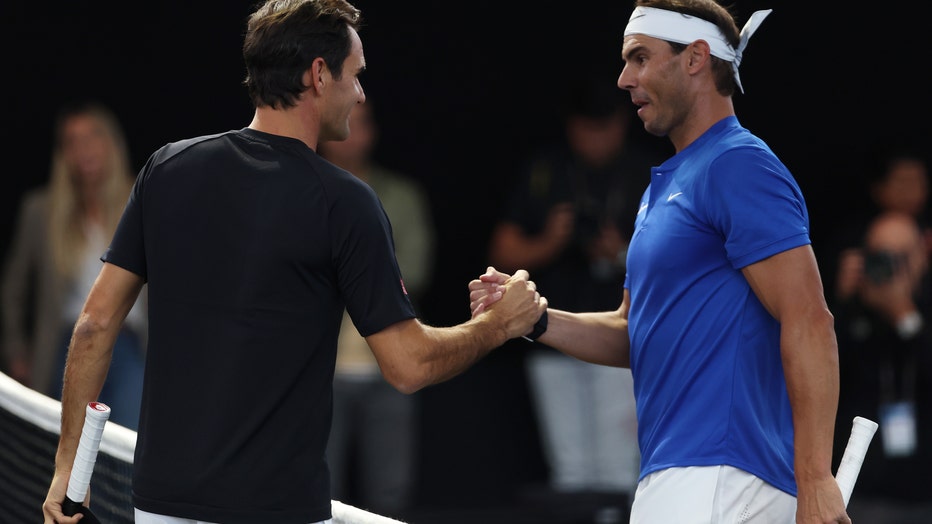 Rafael Nadal and Roger Federer of Team Europe interact during a practice session during Day One of the Laver Cup at The O2 Arena on September 23, 2022 in London, England. (Photo by Julian Finney/Getty Images for Laver Cup)

After his victory, Ruud said about Federer: "All the players will miss him."

"Roger is a unicorn in our sport," Tsitsipas said this week. "He has all my respect, all my appreciation for what he has offered to tennis today. It’s something that, for sure, is not going to be forgotten for thousands of years. He has that charisma and purity and aura about him that made him kind of invincible when he was on the court."

Tiafoe's take on Federer was similar: "I don’t think we’ll see another guy like Roger, the way he played, and the grace he did it with, and who he is as an individual."

There have been similar sentiments expressed by many inside the sport and out in the time since Federer made public on Sept. 15 his plan to finish playing at the Laver Cup.

The last hurrah comes after a total of 103 tour-level titles on Federer's substantial resume and 1,251 wins in singles matches, both second only to Jimmy Connors in the Open era, which began in 1968. Federer’s records include being the oldest No. 1 in ATP rankings history — he returned to the top spot at 36 in 2018 — and most consecutive weeks there (his total weeks mark was eclipsed by Djokovic).

More than the numbers, folks will remember that powerful forehand, one-handed backhand and flawless footwork, a spectacularly effective serve and eagerness to get to the net, a willingness to reinvent aspects of his game and — the part he's proudest of — unusual longevity. Then, too, there is his persona away from the court.

All of which is part of why the truth Friday was that the eventual winner of Federer-Nadal vs. Tiafoe-Sock, the score, the statistics — none of that would matter, was all so entirely beside the point. The day was, after all, about the farewell itself. Or, better, the farewells: Federer's to tennis, to the fans, to his colleagues. And, naturally, each of those entities' farewells to Federer.