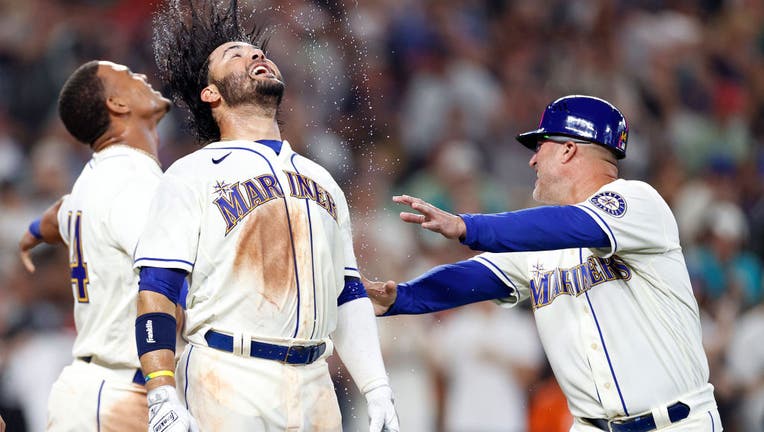 SEATTLE, WASHINGTON - SEPTEMBER 11: Eugenio Suarez #28 of the Seattle Mariners celebrates his walk-off home run with Julio Rodriguez #44 and third base coach Manny Acta #14 during the ninth inning against the Atlanta Braves at T-Mobile Park on Septem

SEATTLE - After the Seattle Mariners gave up five runs in the top of the ninth to trail by a run, it was rookie Julio Rodriguez who came into the dugout fired up and rallying his teammates.

Rodriguez led by example as well, hitting his second home run of the game to tie the score in the bottom of the ninth. Eugenio Suarez then hit his second homer of the day as well as the Mariners rallied for a 8-7 win over the Atlanta Braves on Sunday.

The Braves trailed 6-2 going into the ninth, but Michael Harris II and Robbie Grossman hit two-out homers during a five-run comeback.

Down 7-6, the Mariners tied it when Rodriguez hit his 25th home run with one out off Kenley Jansen (5-2). With two outs, Suarez hit his 30th homer to win it.

"I feel we have the chance, the guys to compete against anybody," Rodriguez said. "That’s why I was confident we were able to come through that last inning. I know what we’ve got on this team."

Rodriguez also led off the game with a homer for Seattle, giving the rookie his first multi-homer game. His ninth-inning blast was clocked at 117.2 miles per hour. According to Statcast, that’s the hardest ball hit by a Mariners player this season.

"Everything Julio does is special," Suarez said.

Jansen is tied for the major league lead with 33 saves, but now has three blown saves in his last seven appearances.

"Deep down it hurts because you feel like the offense definitely battled through it all the way to the end, and unfortunately the result wasn’t what we wanted," Jansen said. "Stuff like that happens. You can call it unlucky, whatever, but I can’t let this bother me. I’ve been through this situation so many times. It can look ugly right now, but I know who I am deep inside."

The Mariners moved into a tie with Tampa Bay for the top AL wild-card spot.

"This is about as big of one as we’ve had all year. We’ve had some big ones," Seattle manager Scott Servais said. "A number of come-from-behind wins, but not from the deep depths of the valley to the top of the mountain in that short a span. It’s pretty awesome."

Atlanta fell to 1 1/2 games behind the New York Mets in the NL East after losing its second in a row. The Braves had taken sole possession of first place on Friday after winning the series opener.

Harris led off the eighth with a home run that got Atlanta within 6-2.

In the ninth, Seattle reliever Diego Castillo walked the first two batters, then a groundout and a strikeout had the Braves facing their final out. Harris worked the count full before hitting a slider to right field for his 18th homer.

Paul Sewald (4-4) then relieved and gave up a single to pinch-hitter Eddie Rosario and Grossman’s go-ahead homer.

"They’re the defending champs for a reason," Sewald said. "They have a really deep lineup. I think they’re going to do just fine in the postseason. But we recovered. That’s why we have a chance of going and doing pretty well ourselves."

The Mariners took the early lead with a strong performance by Seattle starter Marco Gonzales, who didn’t give up a hit until Austin Riley’s 36th homer in the fourth. Gonzales allowed two hits over six innings.

Braves starter Jake Odorizzi was chased in the fourth, his shortest outing since April 20, when he was with the Astros and gave up six runs in just 2/3 of an inning. Odorizzi allowed four runs on five hits against Seattle.

"Today, to come back in the ninth, it just speaks to the magic we’ve got going on here," Gonzales said. "That’s a playoff game right there."

Braves: 2B Vaughn Grissom had a scary moment in the third inning, when he collided with RF Grossman on a high pop fly into shallow right. After Grossman made the catch, Grissom stayed on the ground holding his right leg. Trainers and his teammates gathered around before Grissom eventually jogged off the field and remained in the game.

Mariners: OF Mitch Haniger left the game in the sixth inning with lower back tightness. … 1B Ty France didn’t start. France, who missed four games after jamming his left wrist in late July, is still bothered at times on swing and misses, manager Scott Servais said. With an off day Monday, Servais said this was a good opportunity to let France rest the wrist. France pinch-hit in the ninth and fouled out.

Mariners: RHP Logan Gilbert (12-5, 3.23) will start Tuesday at home against the Padres. Gilbert threw six scoreless innings against the White Sox in his last start.