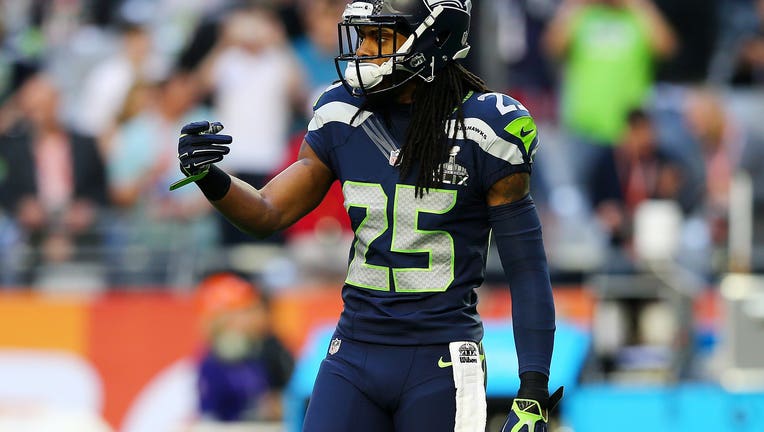 In an interview with NFL Network's Steve Wyche, Sherman admitted that he has not ruled out a return to football, he's simply just putting a pause on the retirement conversation. The 34-year-old veteran cornerback wants to leave his options open.

"No, no, I'm still leaving that door open as long as I can," Sherman told Wyche. "I'm obviously going to keep training and staying in shape, but gotta take the opportunities when they're there, and this is an amazing opportunity with Amazon, so I couldn't pass it up.

"But I'm going to leave that door open, if somebody wants to call late December, and needs some help, I'm happy to help."

Sherman will work with the program for its pregame, halftime, and post game shows on Thursday nights. Joining hall of fame tight end Tony Gonzales along with proven analysts Al Michaels and Kirk Herbstreit as notable names highlighted for Amazon’s first season of TNF coverage.

Russell Wilson and the Denver Broncos will be in Seattle for a Monday Night Football matchup with the Seahawks to kick off the 2022 NFL season.

Sherman, a Stanford graduate, has always been known as a very high IQ player, he hopes to share his knowledge of the game as a broadcaster, "I feel like it's important for players to continue to push the game forward and educate the fans through real experience and real intellect and trying to take them even deeper into the game,"explained. "I think you try to simplify it as much as you can for them, but I think the more informed and educated the fans are, the better the experience is. You want to help them understand their team, understand why this touchdown happened, understand why this big run happened, understand why this interception happened, and I think I can do that."

Sherman steps into the next stage of his career with an impressive legacy behind him. A five-time Pro Bowler and three-time first-team All-Pro selection and Super Bowl champion. Richard quickly grew into a lockdown corner as the Seahawks blossomed into a consistent Super Bowl contender in the early half of the past decade. The former 5th round pick was an essential piece to the Seahawks long term success and back to back Super Bowl appearances.

As the voice of the Seahawks' legendary ‘Legion of Boom’ Sherman became notorious for his trash talking style and take no prisoners attitude. This attitude helped to stop the historic Broncos' offense led by Peyton Manning in their XVIII Super Bowl win.

Success in the NFL is extremely hard to maintain, even for a guy like Sherman. Following a brief stretch of injuries and internal rumors about the Seahawks front office in 2017, Sherman was released. The move was said to be cost-saving, but at this point everyone knew the magic was gone. Despite this heartbreaking move for Seahawks fans, Sherman was quickly picked up by the San Francisco 49ers, signing a $39 million deal with the 49ers just one day following his release from Seattle. Sherman helped the 49ers reach a Super Bowl appearance despite falling short to Patrick Mahomes Chiefs. Still battling injuries, Sherman played out his contract in San Francisco before joining the defending Super Bowl champion Tampa Bay Buccaneers. He played 5 games before being added to injured reserve in January.

Following the departure of both Russell Wilson and Bobby Wagner this past offseason, who are both regarded at the best in their position, paired with Sherman’s departure to TV, marks the official end of a legendary era in Seattle.

"I've got something in the tank," Sherman said. "But right now I'm excited and focused on this Amazon opportunity. It's the first time you get to talk about the game, get to feel the atmosphere. Thursday nights have always been exciting, obviously I haven't always been a fan of them, I'm excited to call from this side."