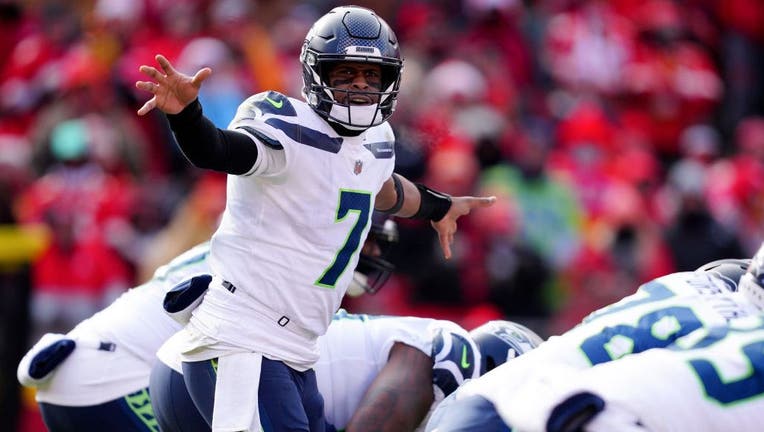 KANSAS CITY, MISSOURI - DECEMBER 24: Geno Smith #7 of the Seattle Seahawks calls a play during the third quarter against the Kansas City Chiefs at Arrowhead Stadium on December 24, 2022 in Kansas City, Missouri. (Photo by Jason Hanna/Getty Images)

SEATTLE - Geno Smith already checked off wins over the Chargers and Giants earlier this season, two of the teams he played for before arriving in Seattle.

Next up on the docket might be the most important, even if Smith tried to downplay the significance of starting against the New York Jets with the Seahawks’ playoff hopes at stake.

"I really just feel like the importance of it is we need a win so we can get to the playoffs," Smith said. "Now, obviously, there will be some speculation and talk about that. It comes with the territory. ... I got a lot of love for the Jets."

The personal connection between Smith and the Jets is one of many storylines surrounding a matchup that could eliminate the loser from the playoffs.

Smith was drafted by the Jets and started during his first two seasons. Then he was cast off and spent seven years mostly as a backup with both New York teams, the Chargers and Seattle. He won the Seahawks’ job following the trade of Russell Wilson to Denver and has enjoyed a resurgence, earning a Pro Bowl selection and leading Seattle (7-8) into playoff contention.

"When he had a chance to play last year, he did some really great things," said Jets left tackle Duane Brown, who previously played in Seattle. "He knew in his mind, if given an opportunity to have a full-time role as a starter, he could really make some things happen. And he’s been doing that. He’s had a phenomenal year and I’m really happy for him."

The Jets’ quarterback situation has been less stable.

Mike White is back for New York (7-8) after missing two games with fractured ribs, coupled with the demotion of former No. 2 overall pick Zach Wilson. White’s first start for the Jets came in a 31-10 win over Chicago on Nov. 27, which is also the last time New York won. The Jets have lost four straight, two of those with White under center before he hurt his ribs in the loss to Buffalo.

"On game days, it’s especially hard when physically you feel like you can go out there, but I understand why the doctors couldn’t clear me," White said. "It was tough, but if you make the most out of it, you will be all right."

Seattle would be eliminated from the NFC playoffs with a loss to the Jets and a win by Washington. There are scenarios where Seattle could lose to the Jets and still make the postseason with a win over the Rams in Week 18, but that would hinge on Washington losing its last two games and the Seahawks getting significant help.

New York is unexpectedly in a similar position. When the Jets walked off the field at MetLife Stadium last Thursday night after a 19-3 loss to Jacksonville, their playoff hopes appeared all but gone.

But losses last weekend by Miami, New England, Las Vegas and Cleveland have New York very much in the AFC playoff hunt. If the Jets win their last two games and the Patriots lose or tie one of their final two, New York will snap an 11-year postseason drought.

"We just have to deliver. We have another chance to be relevant for the playoff run. This doesn’t matter if we don’t take care of business," Jets linebacker C.J. Mosley said.

The game features two cornerbacks who are contenders for defensive rookie of the year: the Jets’ Sauce Gardner and Seattle’s Tariq Woolen. Gardner was taken with the No. 4 overall pick in the draft and has lived up to his billing. He leads the league in pass breakups with 16 and has two interceptions.

Woolen is the surprise. He was viewed as a project when the Seahawks selected him in the fifth round out of UTSA. But Woolen has passed seemingly every test and entered the weekend tied for the league lead in interceptions with six.

"It’s rare to come out and have the amount of success that they’re having. These are two corners that are going to be successful for a very long time," Jets coach Robert Saleh said.

The Seahawks hope Tyler Lockett may be able to return less than two weeks after having surgery to stabilize a broken bone in his left hand. Lockett has 78 catches and leads the team in receiving touchdowns with eight.

His presence was missed last week against Kansas City. Without Lockett on the field, the Chiefs rolled coverage toward DK Metcalf. As a result, Metcalf had seven catches for 81 yards but nearly half that came on a 35-yard completion. Lockett’s absence also contributed to Seattle going 2-for-14 on third downs against Kansas City.