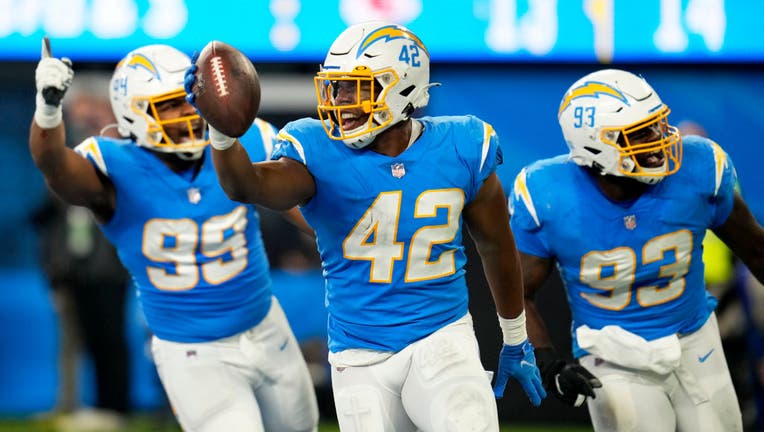 Inglewood, CA - December 16: Outside linebacker Uchenna Nwosu #42 of the Los Angeles Chargers reacts after intercepting a pass running for a touchdown against the Kansas City Chiefs in the second half of a NFL football game at SoFi Stadium in Inglewo

The Seattle Seahawks are signing former Los Angeles Chargers linebacker Uchenna Nwosu to a two-year deal worth $20 million with $10.5 million guaranteed, according to multiple reports.

The deal was first reported by Adam Schefter of ESPN.com.

Nwosu, 25, is coming off the best season of his career. He became a full-time starter last season for the Chargers and responded with 40 tackles, 5.0 sacks, and 17 quarterback hits. All three are career-highs. He also recorded the first interception of his career.

The addition of Nwosu signals a continued shift by the Seahawks in their desire to run more of a 3-4 defense under defensive coordinator Clint Hurtt and associate head coach-defense Sean Desai. Nwosu played as a 3-4 outside linebacker with the Chargers and would seem to pencil in to Seattle's "LEO" pass rusher position.

Nwosu has appeared in 62 career games for the Chargers with 25 career starts, 15 of which came last season. The 782 snaps he played last season were more than double that of any other season in his career.