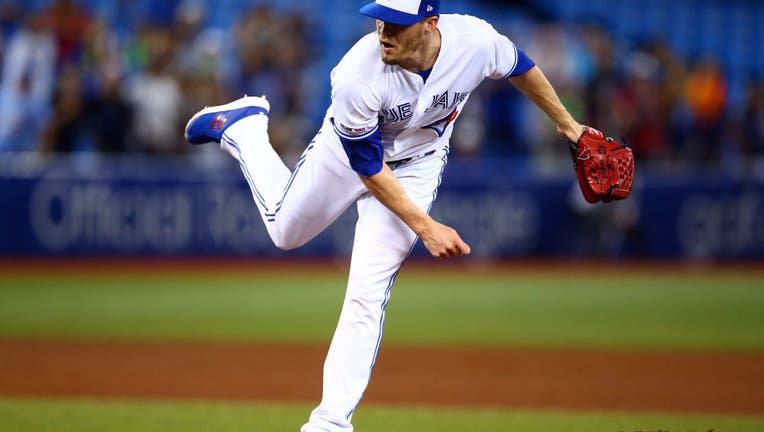 TORONTO, ON - AUGUST 16: Ken Giles #51 of the Toronto Blue Jays delivers a pitch in the ninth inning during a MLB game against the Seattle Mariners at Rogers Centre on August 16, 2019 in Toronto, Canada. (Photo by Vaughn Ridley/Getty Images)

The Seattle Mariners have shut down reliever Ken Giles from throwing for the immediate future due to an injury to a tendon in his finger.

Per Shannon Drayer of the Mariners Radio Network, Giles will not need surgery, but he will be shut down "for a couple of weeks."

Giles, 31, signed a two-year deal with the Mariners last year. He didn't pitch for the team at all in 2021 as he was recovering from Tommy John surgery. Even if the shut-down only lasts a couple of weeks, Giles will need time to get back to full strength before being able to join the Mariners bullpen.

Giles has been a closer for both the Houston Astros and Toronto Blue Jays during his seven-year MLB career. He posted a career-high 34 saves with a 2.30 ERA for the Astros in 2017 as they went on to win a World Series since tarnished by the team's sign-stealing scandal. After going through struggles with Houston, Giles re-gained his form in Toronto. He had 23 saves with a 1.87 ERA in his last full season of action for the Blue Jays in 2019.

The loss of Giles for the time being is a blow to the Mariners' bullpen depth. The unit was one of the biggest reasons the team was in contention until the final day of the season last year. Giles returning to the group, along with the return of Andrés Muñoz from Tommy Surgery as well, was thought to add even more depth to the group.

However, Casey Sadler has already been ruled for the season due to shoulder surgery after being a key piece of the group last season. Giles' absence to start the unit is another blow to the group.

The Mariners have five games left in spring training before opening the season next Friday on the road against the Minnesota Twins.