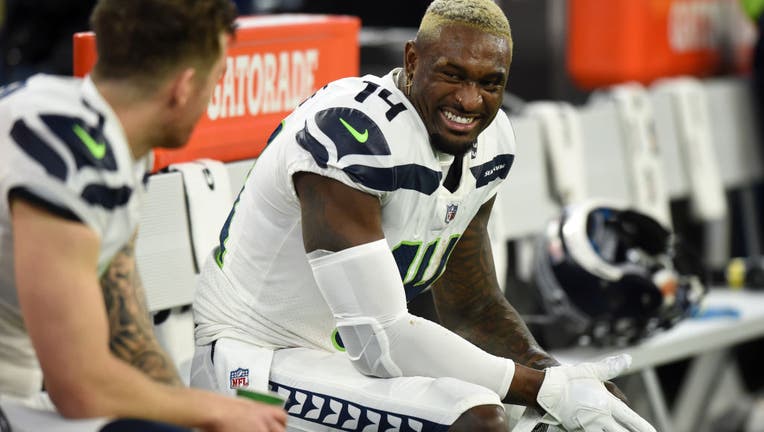 INGLEWOOD, CA - DECEMBER 21: Seattle Seahawks Wide Receiver DK Metcalf (14) looks on from the bench with a smile during an NFL game between the Seattle Seahawks and the Los Angeles Rams on December 21, 2021, at SoFi Stadium in Los Angeles, CA. (Photo

RENTON, Wash. - The Seattle Seahawks have reached an agreement with wide receiver DK Metcalf on a three-year extension worth $72 million with $58.2 million guaranteed.

As reported by Adam Schefter of ESPN.com, the deal contains a $30 million signing bonus, which is the largest bonus ever for a wide receiver.

The extension will keep Metcalf under contract through the 2025 season. He had previously been set to earn $3.9 million this season in the final year of his rookie contract.

Metcalf ranks 10th among all receivers in yards and is tied for fifth in touchdowns since he was drafted in 2019. He's tied for ninth all-time in touchdown catches by a receiver over a player's first three seasons. Only Randy Moss (43), Jerry Rice (40), John Jefferson (36), Bob Hayes (35), Odell Beckham Jr. (35), Alyn Beals (34), Harlon Hill (32), and Turner have more receiving touchdowns from the wide receiver position over their first three years.

The contract brings a new money value of $24 million a year, which puts him tied for sixth among receivers in the NFL alongside Stefon Diggs of the Buffalo Bills. Only Tyreek Hill of the Miami Dolphins ($30 million/year), Davante Adams of the Las Vegas Raiders ($28 million/year), DeAndre Hopkins of the Arizona Cardinals ($27.25 million/year), Cooper Kupp of the Los Angeles Rams ($26.7 million/year) and Metcalf's college teammate, A.J. Brown of the Philadelphia Eagles ($25 million/year) surpass Metcalf.

Metcalf reported for training camp but had not participated the first two days as he awaited completion of his new deal. Head coach Pete Carroll didn't have any update on the situation immediately after practice, though the deal got done shortly afterward.