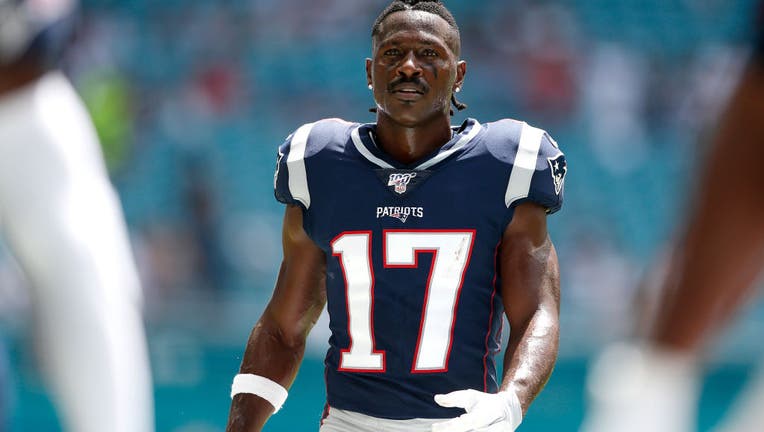 MIAMI, FLORIDA - SEPTEMBER 15: Wide Receiver Antonio Brown #17 of the New England Patriots warms up prior to the game against the Miami Dolphins at Hard Rock Stadium on September 15, 2019 in Miami, Florida. (Photo by Michael Reaves/Getty Images)

RENTON, Wash. - One of the most controversial wide receivers on the market is about to eligible once again and, according to Adam Schefter, the Seahawks could be in hot pursuit.

Antonio Brown, suspended for the first eight weeks of the season, is eligible to return in time to watch the Seahawks take on the Bills on November 8th. But could he actually be joining them in Buffalo?

Russell Wilson has noted his desire for more star power here in Seattle, and Brown certainly has the talent. It doesn’t hurt that that the two trained together over the summer either.

However, Brown comes with some hefty baggage alongside his skills. His suspension stems from a no-contest plea to burglary and battery charges, as well as accusations of intimidating a woman who accused him of making unwanted sexual advances?

Oh, and let’s not forget about the time he complained about getting targeted 17 times in a single game. Doubtful he’d receive more in a run-heavy Seahawks offense (no matter how much Russell is cooking these days).

At 5-0, do the Seahawks need to add someone of Brown’s reputation to their locker room? Do they need the added talent to take the next step? Time will tell what the front office deems best.

What would you do?