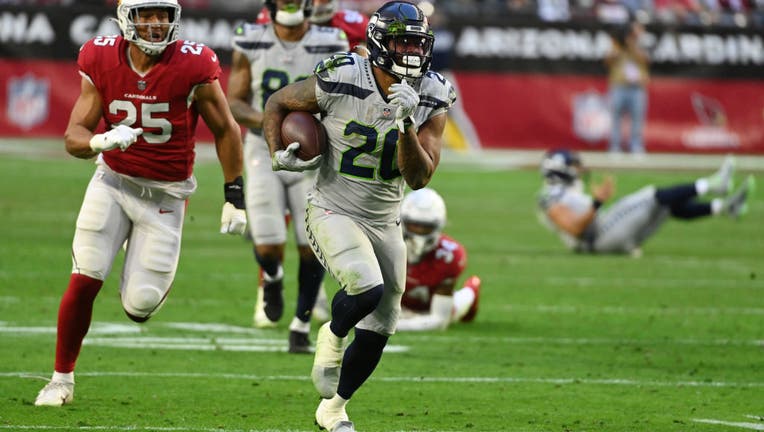 GLENDALE, ARIZONA - JANUARY 09: Rashaad Penny #20 of the Seattle Seahawks runs with the ball against the Arizona Cardinals at State Farm Stadium on January 09, 2022 in Glendale, Arizona. (Photo by Norm Hall/Getty Images)

The Seattle Seahawks are re-signing running back Rashaad Penny to a one-year deal, according to Ian Rapoport of the NFL Network.

The deal is with $5.75 million with incentives that could push the total value to $6.5 million. Per Rapoport, Penny turned down larger offers to remain in Seattle.

"I feel like my journey is really just beginning," Penny said after the Cardinals game.

Despite not playing much before the final six games of the season, Penny had eight carries of at least 25 yards for the season. That tied Jonathan Taylor of the Indianapolis Colts for most 25-yards runs in the NFL this season. While Penny started just six games, Taylor needed all 17 games to have as much such runs. He had 92 carries for 671 yards and five touchdowns over the final five games of the season.

After being selected in the first round of the 2018 NFL Draft, Penny dealt with several injuries that kept him from being available and productive. He showed flashes at times, but nothing like the explosion seen at the end of the year.

The Seahawks declined a fifth-year option on Penny last year that would have kept him under contract for 2022 without reaching free agency. But with his lack of consistent success and availability, the team elected against it. Penny gets an extra $1.227 million this season as a result on his new deal.

The one-year deal for Penny serves as a "prove-it" deal for both sides. If Penny continues his breakout, he can hit the free agent market again in a year. If he can't replicate the success, the deal isn't a long-term anchor for the Seahawks.