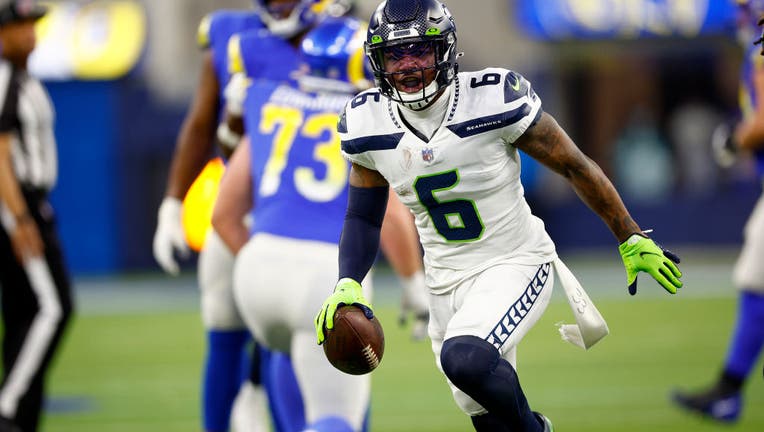 INGLEWOOD, CALIFORNIA - DECEMBER 21: Quandre Diggs #6 of the Seattle Seahawks reacts after intercepting a pass during the first half of a game against the Los Angeles Rams at SoFi Stadium on December 21, 2021 in Inglewood, California. (Photo by Sean

The Seattle Seahawks are re-signing Pro Bowl safety Quandre Diggs to a three-year deal worth $40 million, according to Ian Rapoport of the NFL Network.

Diggs, 29, is coming off consecutive Pro Bowl seasons in Seattle. He was traded to the Seahawks midway through the 2019 season from the Detroit Lions. In his two full seasons for Seattle, Diggs has started every game and totaled 10 interceptions. He set a career-high with 94 tackles last season for Seattle.

Diggs sustained a dislocated ankle and fractured fibula in Seattle's final game of the season against the Arizona Cardinals. He had surgery after the season and is expected to be fully healthy in plenty of time for training camp.

"That’s all he’s thinking about," head coach Pete Carroll said at the NFL Combine last month. "He’ll be back before then I would think."

Carroll said then the team hoped to keep Diggs in Seattle.

"We really want to get him back," Carroll said.

Keeping Diggs appeared to be a significant need for Seattle, especially following the release of Bobby Wagner last week. Diggs is a leader in the Seahawks' locker room and Wagner's absence on that front will be sizable.

Diggs' new deal would make him the ninth highest paid at the position, per OverTheCap.com, on an average per year basis.