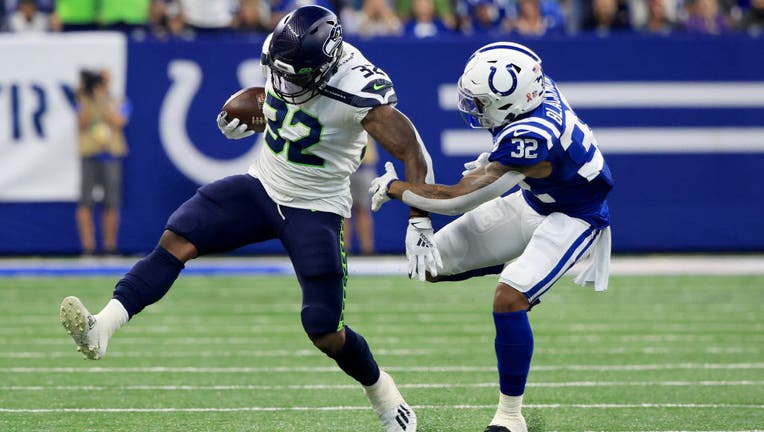 Seattle Seahawks running back Chris Carson is retiring from the NFL due to ongoing concerns over a neck injury sustained last season, according to Ian Rapoport of the NFL Network.

The Seahawks officially released Carson with a failed physical designation on Tuesday, In doing so, that will allow Carson to collect injury protection benefits.

"Ever since the first time I saw Chris on film, I loved his style, and I was thrilled when we were able to get him when we did," head coach Pete Carroll said in a team statement on Tuesday. "To see him grow and become such an impacting part of our program with such a great style and all of that, it was a thrill to watch. We'll miss him and everything he brought to our program."

Carson's ability to continue his career had been in doubt for a while.

Carroll said in June that Carson had been unable to get cleared in meeting with doctors prior to the conclusion of the team's mini-camp. Carroll's comments hinted that Carson could be unable to continue his career.

"Our guys love this game that they grow up playing, and when they sense that there may be an end to it, it’s hard. It’s difficult, and it’s real," Carroll said. "And we’re going to love him through it and help him as much as possible, if that’s the case, like we do with everybody when it comes to the end of it. It’s inevitable. It’s coming, but it’s always too soon, so we’re trying to fight that off."

Carson said in an interview the following day that he was still intent on playing.

"Oh, we still going right now," Carson told Jonathan Adams of Heavy.com. "I see myself playing until I feel like stopping. My mindset is never to give up. So, I’m staying positive like I said, and continue to fight and get back onto the field."

However, the odds apparently weren't in Carson's favor.

Carson had surgery to fuse a disc in his neck that was causing him ongoing discomfort. Despite appearing in just four games last season, Carson spent many weeks trying to get back on the field without success. Ultimately, it was decided that he needed to have surgery. He was still having issues with flexibility and range of motion, Carroll said, as of June when mini-camp wrapped up.

"He still doesn't have full range in a couple areas of things that he's got and he's right at the cusp of getting there," Carroll said. "And the time is on him now, you know, can you beat the clock here a little bit. So he's close. He's really close. And he knows that and so, you know, he's frustrated that he couldn't show it this time around. But he knows, OK, here's our next loop. And so he's going for it just like our guys know how to do and we're all pulling for him."

The Seahawks drafting Ken Walker III out of Michigan State in the second round of the draft seemed to be insurance at the running back spot should Carson be unable to play. That gave a pretty strong indication that the team doubted Carson would be able to play for them moving forward.

"He's been an incredible pro, a guy who brings an amazing energy about him," general manager John Schneider said in a statement. "His running style is what we've always wanted here in Seattle. He's the type of runner that the whole team feeds off of. The type of player defensive players get off the bench to watch him run—they can feel his energy. He's the type of runner whose style affects the whole team, not just the offense.

"It's a big disappointment. We took it as long as we possibly could with him, he saw a number of specialists, but unfortunately he wasn't able to pass our physical."

The Seahawks will now turn to Walker, Rashaad Penny, DeeJay Dallas, Travis Homer, Josh Johnson and Darwin Thompson for their backfield options with training camp set to begin on Wednesday.