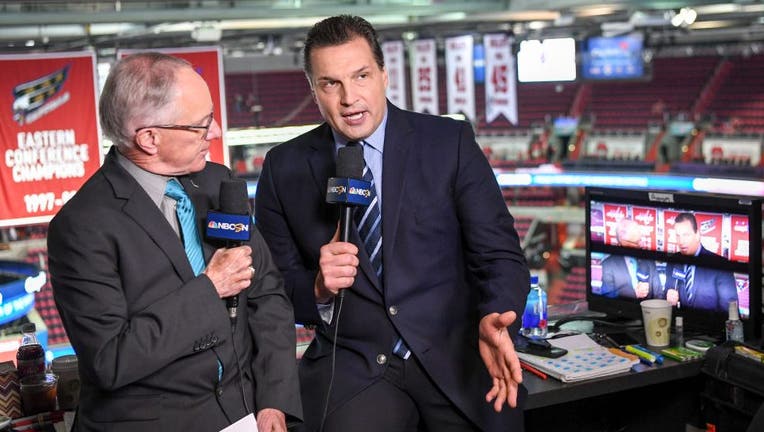 WASHINGTON, DC - MAY 15: NBC hockey commentator Eddie Olczyk (R) talks with Michael "Doc" Emrick as they do the pregame prior to action between the Tampa Bay Lightning and the Washington Capitals during the Eastern Conference finals. (Photo by Jonath

The Seattle Kraken are reportedly set to add Eddie Olczyk to their television broadcast team after an impending departure from the Chicago Blackhawks.

According to Jeff Agrest of the Chicago Sun-Times, Olczyk was unable to reach an agreement on a new deal to continue as the color analyst with the Blackhawks, a role he's held since joining the broadcasts in 2006.

"We just could not come to terms on a contract, and I have stepped away," Olczyk told the newspaper. "There was a contract on the table, but I have decided to step away.

"I had an incredible conversation with [chairman] Rocky [Wirtz], met with him in person, as well as Danny [Wirtz] and Jaime [Faulkner]. There’s great disappointment, but this was my decision. In negotiations, sometimes you can’t come to terms, and that's what happened here."

Olczyk's brother, Ricky, is an assistant general manager of the Kraken under G.M. Ron Francis.

Per the report, Olczyk will join the Kraken's broadcasts and continue in his role working nationally televised games for TNT as an analyst as well. The Kraken's TV broadcasts on ROOT Sports have featured John Forslund as the play-by-play voice with former NHL player J.T. Brown providing color commentary.

Per Geoff Baker of the Seattle Times, discussions with the Kraken have been to continue with Forslund, Olczyk and Brown as a three-man booth. Brown would then still be in place to work games when Olczyk is away for national TNT broadcasts, presumably.

Forslund and Olczyk have previously worked together on national broadcasts for the NHL on NBC.

Olczyk, 55, played 16 years in the NHL as a center for the Blackhawks, Toronto Maple Leafs, Winnipeg Jets, New York Rangers, Los Angeles Kings and Pittsburgh Penguins. He appeared in 1,031 career games and totaled 342 goals and 452 assists. Olczyk was a member of the Rangers' Stanley Cup championship team in 1994 and was named to the United States Hockey Hall of Fame.

Olczyk has also become a fixture in horse racing telecasts on NBC where he has been a part of coverage of Triple Crown events the Kentucky Derby, Preakness Stakes and Belmont Stakes.