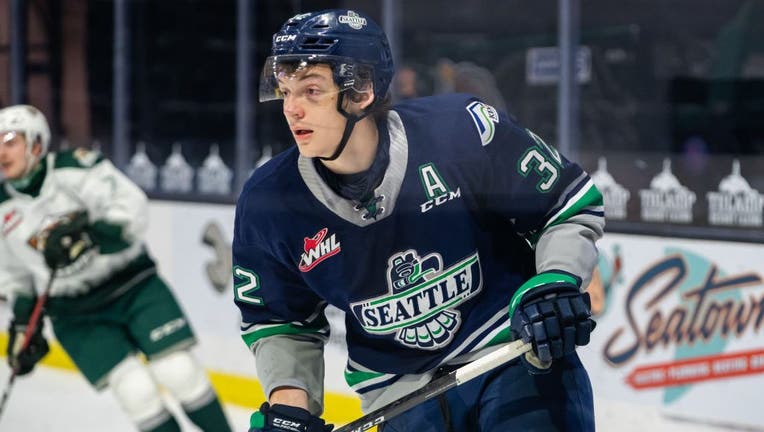 Matthew Rempe and Conner Roulette each scored goals and Thomas Milic delivered 43 saves as the Seattle Thunderbirds earned a 2-1 victory over the Edmonton Oil Kings in Game 1 of the WHL Championship Series on Friday night.

The Oil Kings held a 44-22 advantage in shots on the night, but Milic held strong to carry the Thunderbirds to the win.

After a scoreless opening frame, Rempe got Seattle on the board just two minutes into the second period. A shot attempt from Reid Schaefer rebounded cleanly to Rempe, which gave him a wide open net for a backhand shot past Sebastian Cossa to give the Thunderbirds the 1-0 lead.

Milic came up with a big save in the closing seconds of the second period. Despite Seattle being up a man on the power play, the Oil Kings got a two-on-one breakaway chance short-handed. Schaefer flew back on defense and dove in the passing lane between Jakub Demek and Tyler Horstmann. Demek maneuvered the puck around Schaefer and his shot on Milic was saved with three seconds left in the period to preserve the lead.

With just under 11 minutes left to play, Jordan Gustafson delivered a pass off the boards to defenseman and team captain Tyrel Bauer just inside the blue line. Bauer fired a shot that was deflected in front of the net by Roulette that beat Cossa to extend the lead to 2-0.

Cossa finished with 20 saves on 22 shots on the night for Edmonton.

After a boarding penalty from Sam Popowich gave Edmonton a power play chance, the Oil Kings finally managed to strike. Like Roulette's goal, Carter Souch deflected a point shot from Luke Prokop in front of the net that finally beat Milic to make it a 2-1 game.

Edmonton pulled Cossa with 1:48 remaining and got a few good chances on Milic, but Seattle managed to hold on for the victory.

Gustufson, Bauer, Schaefer and Roulette picked up the assists on the two goals for Seattle.

Game 2 is set for Sunday at 3 p.m. PT in Edmonton. Games 3 and 4 are the only two games scheduled to be played at home due to building conflicts at accesso ShoWare Center.