RENTON, Wash. – Nobody said it was going to be easy.

The new-look Seattle Seahawks are starting off their 2018 season with a tough two-game road swing that begins Sunday with a trip to Mile High Stadium to play the Denver Broncos. Kickoff is at 1:25 p.m. on the official home of the Seahawks, Q13 FOX.

“This happens to be a challenging matchup, just because of the style of play,” Seahawks coach Pete Carroll said last week. “The way they run the ball, the way the play defense, the players that they have, the fact they were able to get Case Keenum on their team – a guy that was on a team that won 13 games last year. He’s gonna bring great stability and leadership and all that.” 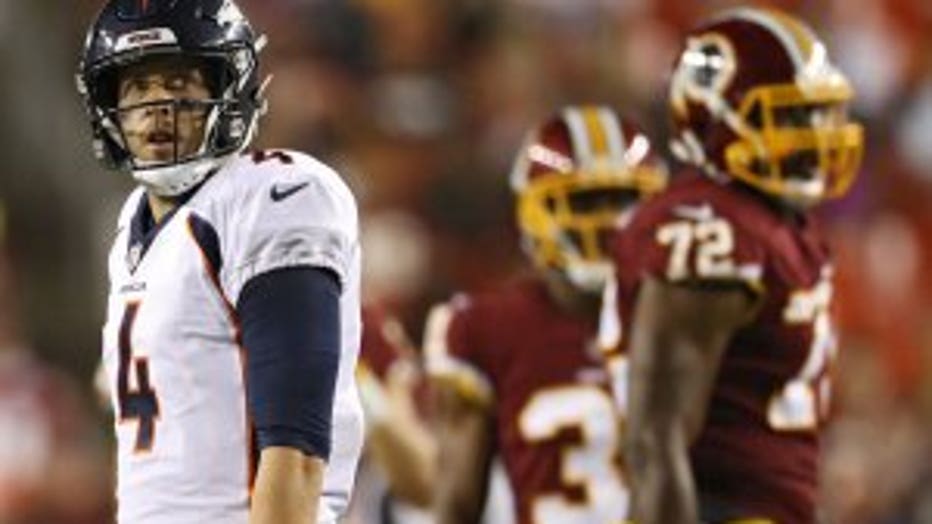 LANDOVER, MD - AUGUST 24: Quarterback Case Keenum #4 of the Denver Broncos looks on against the Washington Redskins in the first half during a preseason game at FedExField on August 24, 2018 in Landover, Maryland. (Photo by Patrick Smith/Getty Images

Yes, Case Keenum. Much has changed since the last two times the Seahawks and Broncos faced each other with Peyton Manning and the Legion of Boom both in their heydays .

A 2014 matchup went to overtime, with the Seahawks winning 26-20 thanks to a 6-yard touchdown run by Marshawn Lynch. And before that, of course, the Seahawks beat the Broncos, 43-8, in Super Bowl XLVIII.

Now, however, the Broncos have Keenum behind center after signing him to a two-year, $36 million contract in the offseason. Keenum started 14 games for the Minnesota Vikings last season, completing 325-of-481 passes for 3,547 yards and 22 touchdowns with seven interceptions.

Carroll said the Seahawks are ready for the revamped Broncos.

“We’ve worked through the preseason and checked it all out, and we know that there will be some surprises in the early part of this game, really on both sides of the ball – both teams will,” Carroll said. “So, we have to be able to adjust and adapt and all of that. So, it’s a pretty basic plan going into it but one where we know we can make some adjustments if we have to tailor to what we need to do to get the game won. So it’s a great matchup, we’re excited.”

The Seahawks, of course, spent the offseason remaking their team. With only Earl Thomas remaining from the Legion of Boom and many of the top players on defense gone, middle linebacker Bobby Wagner is now in the spotlight on defense.

Wagner said the Seahawks are ready to get back on the field after months of dealing with the bitter taste of missing the playoffs last season.

“You have a little more juice, but I think that comes from the way the season ended last year,” Wagner said. “I think everybody that was part of that group last year … didn’t like how it ended. We’ve been itching to get back out there and get rid of what happened last year. There’s an excitement throughout the building to get out there and show what we’re capable of doing. We understand there’s a lot of people doubting us because of the pieces we don’t have, and we’re excited to show them otherwise.”