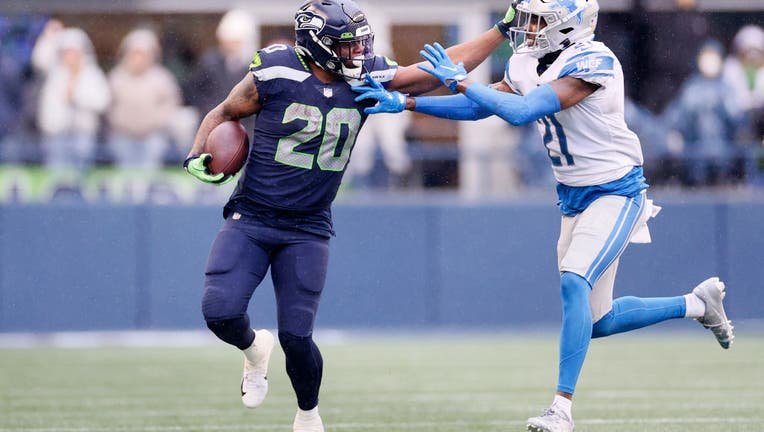 SEATTLE, WASHINGTON - JANUARY 02: Rashaad Penny #20 of the Seattle Seahawks stiff arms Tracy Walker III #21 of the Detroit Lions during the first half at Lumen Field on January 02, 2022 in Seattle, Washington. (Photo by Steph Chambers/Getty Images)

RENTON, Wash. - Running back Rashaad Penny quite simply didn't want to play anywhere except for the Seattle Seahawks.

"This just felt like home," Penny said on a Zoom call with reporters.

Penny re-signed with Seattle on a one-year deal on Monday. Penny admitted that the contract was for less than he had been offered from other teams in free agency. But ultimately, Penny didn't want to go anywhere else.

"To be honest, I really wasn't even focused on all the deals and everything," Penny said. "I voiced my opinions to my agents, who've done an amazing job just getting it done with these guys here."

Penny's contract is reportedly with $5.75 million with incentives that can push the deal to $6.5 million. He gets a $4 million signing bonus as well.

When asked what other teams had interest in him, Penny dismissed any other option.

"Just this team. I'm thankful for this team," he said. "I think I had my eyes set on where I want to be, and we made it happen, and I'm here now."

"I was more comfortable here," Penny said of his finish to the season. "I think I got in a rhythm, in a groove, with the guys in the offense. So it was like a no-brainer for me to know where to come back to.

Penny expressed he'd made a change in his running style late last season. Adrian Peterson convinced him to be more physical as a runner, which helped him get better results on the field.

"I've been telling myself start running more aggressive and just hitting the holes," Penny said in December. "Nothing is there just hit it.

"Something I've learned from watching Chris [Carson] and now having Adrian Peterson in the room, watching his highlights a few days ago, just looking at what he does in the run game and trying to mimic a little bit of that."

Despite not playing much before the final six games of the season, Penny had eight carries of at least 25 yards for the season. That tied Jonathan Taylor of the Indianapolis Colts for most 25-yards runs in the NFL this season. While Penny started just six games, Taylor needed all 17 games to have as much such runs. He had 92 carries for 671 yards and five touchdowns over the final five games of the season.

"I’m just thankful to be back here," he said. "This means a lot to me, to be back with the same running back group. … This is just a lovely environment, and I wouldn’t trade it for anywhere else."

Drew Lock: Nothing promised from Seahawks, excited for fresh start

Seattle Seahawks quarterback Drew Lock said he hasn't been promised anything from his new team in regard to being the starting quarterback this fall. Lock said that's exactly the way he wants it and intends to go compete for the job in Seattle.