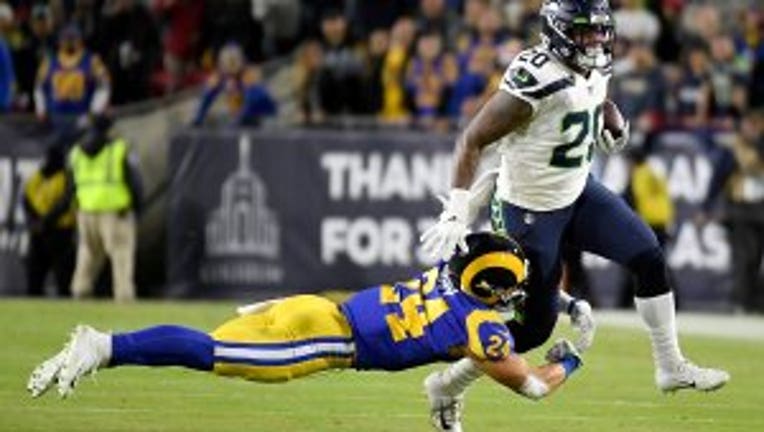 Running back Rashaad Penny #20 of the Seattle Seahawks is tackled by safety Taylor Rapp #24 of the Los Angeles Rams in the first quarter of the game at Los Angeles Memorial Coliseum on December 08, 2019 in Los Angeles, California. (Photo by Kevork Dj

SEATTLE – Seahawks running back Rashaad Penny will miss the rest of the season after suffering an ACL injury in his left knee during Seattle’s loss to the Los Angeles Rams Sunday, coach Pete Carroll said Monday.

Penny was in clear pain after a 16-yard rush on the opening drive. It didn’t get much better for Seattle after that, who went on to lose 12-28.

Carroll didn’t have specifics about the injury but noted that doctors "could tell it's a significant injury."

After playing sparingly for the first half of the season, Penny gained a blossoming role in Seattle’s running game after Week 12. Penny had a career day during the win over the Eagles, running for 129 yards and earning a 58-yard TD that iced the game.

The Seahawks enjoyed the one-two punch between Chris Carson and Penny again with the two combining for 176 yards and two touchdowns in a win over the Vikings.

C.J. Prosise returned from injury on Sunday for the first time since Week 7 and is expected to fill the number two spot behind Carson.