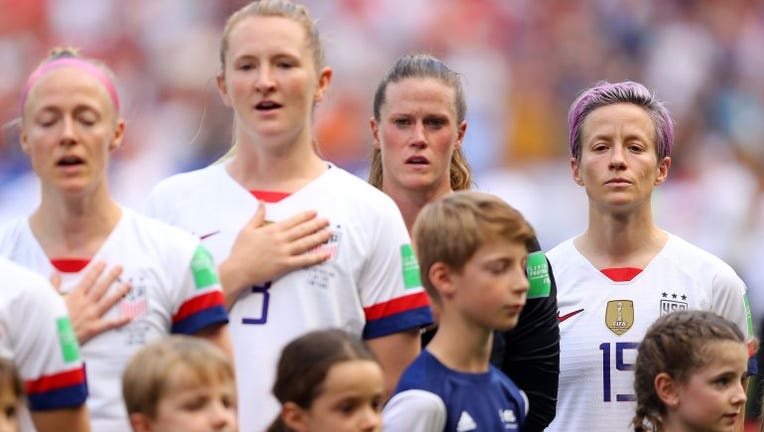 Megan Rapinoe of the USA looks on during the national anthem prior to the 2019 FIFA Women's World Cup France Final match between The United States of America and The Netherlands at Stade de Lyon on July 07, 2019 in Lyon, France. (Photo by Richard Hea

LYON, France --  Rose Lavelle has put the United States up 2-0 against the Netherlands with a fine solo goal in the 69th minute.

The midfielder collected the ball some 30 meters out, advanced to the penalty area and skipped past defender Stefanie van der Gragt before planting a low shot past goalkeeper Sari van Veenendaal.

She was mobbed as she dived into the arms of her teammates as she sprinted to the U.S. bench to celebrate.

Megan Rapinoe has opened the scoring for the United States in the 61st minute with a penalty against the Netherlands in the Women's World Cup final.

Rapinoe confidently struck the spot-kick down the middle and past a static Sari van Veenendaal, who seemed to anticipate Rapinoe would shoot to the side and was wrong-footed.

It was Rapinoe's sixth goal, tying her with Morgan and England's Ellen White at the top of the scoring charts.

U.S. defender Kelley O'Hara has been replaced for the second half by Ali Krieger.

O'Hara needed on-field treatment near the end of the first half after colliding head to head with Dutch winger Lieke Martens as they jumped up to contest a high ball.

The United States and the Netherlands were deadlock 0-0 at halftime in the Women's World Cup final, mainly because of Dutch goalkeeper Sari van Veenendaal. She has made three key stops.

Van Veenendaal imposed herself again in the 38th, keeping out Alex Morgan's low shot from Megan Rapinoe's left-wing cross. She denied Morgan again, this time with an even better save, low to her left to tip Morgan's fizzing driver away for a corner.

U.S. goalie Alyssa Naeher had a quiet half but came out confidently to clear the ball when forward Lineth Beerensteyn chased down a pass from Vivianne Miedema.

Dutch winger Lieke Martens and U.S. defender Kelley O'Hara both needed brief on-field treatment near the end of the half after colliding head to head while going for a header.