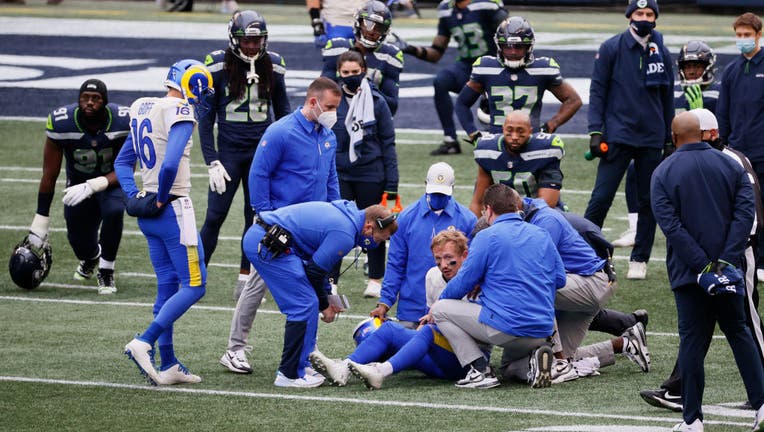 SEATTLE, WASHINGTON - JANUARY 09: Quarterback John Wolford #9 of the Los Angeles Rams is looked at by team trainers and head coach Sean McVay after an injury during the first quarter of the NFC Wild Card Playoff game against the Seattle Seahawks at L

SEATTLE - Los Angeles Rams quarterback John Wolford left Saturday’s wild-card playoff game against the Seattle Seahawks after taking a shot to the head and was later transported to a hospital.

Wolford was scrambling in the first quarter and was going down to the ground when Seahawks safety Jamal Adams met the quarterback with his shoulder pad and possibly his helmet. Wolford was hit in the head and was seen heading back to the locker room for further evaluation. Jared Goff replaced Walford.

He has a neck injury was questionable to return, the team said.

An Associated Press photographer later saw Wolford being loaded on a stretcher into the back of an ambulance.

Los Angeles said it was for "precautionary measures."

Rams coach Sean McVay told FOX Sports before the game that Wolford was going to start as Jared Goff is only more than a week removed from having thumb surgery. Goff and the Rams hadn’t been in a playoff game since losing to the New England Patriots in Super Bowl LIII.

Wolford, a rookie from Wake Forest, started in his first career game last week against the Arizona Cardinals. He helped the Rams solidify a playoff spot with the 18-7 victory and knocked the rival Cardinals out of postseason contention.

Los Angeles finished the 2020 regular season two games behind the Seahawks for the NFC West crown.

Get more from FOXNews.com