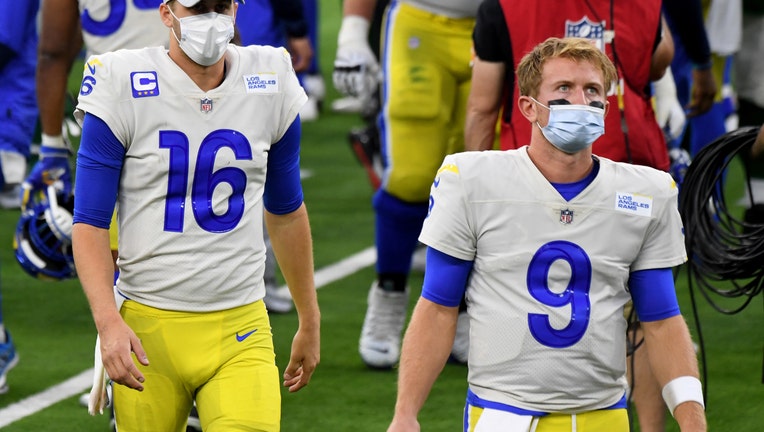 THOUSAND OAKS, Calif. - The Los Angeles Rams have endured 2 1/2 straight seasons of mostly declining offensive performance. The only significant addition to their offensive roster over that stretch is Cam Akers, their rookie running back who didn’t crack the NFL’s top 30 in yards.

From that perspective, it’s understandable why the Rams (10-6) want to maintain the advantage of not revealing their starting quarterback for Saturday’s playoff game until they step on the field in Seattle.

For an offense that’s looked mostly the same since 2018 except for its subtractions of talent, any amount of unpredictability seems important.

Coach Sean McVay and Jared Goff both declined Thursday to say whether Goff will return from a one-game absence with a broken thumb to start against the Seahawks (12-4).

"We are going to work through that, and we’ll see on Saturday," McVay said. "I think he’s done everything in his power to handle the situation. I’ve been pleased with the progress he’s made. He’s doing everything that our practice allows."

Although backup John Wolford led the Rams to a season-ending win over Arizona last week, Goff emerged from this full week of practice at the Rams’ training complex looking like he’s ready to play, at least from what observers could see and what his teammates thought.

But Goff deflected every question about his readiness Thursday, saying only that his thumb "is continuing to progress well. The progress is steady and increasing. ... I’m going to stay vague. It feels good. It’s in a good place."

Wolford also had little to say about the situation after performing well in his NFL debut last week, albeit without leading a touchdown drive.

"I’m trying to treat it like I would any other week," Wolford said. "Whether you’re the (backup) or the (starter), in my mind, your preparation should be the same. I’ll keep doing what I’ve been doing the past 17 weeks."

The small element of surprise is valuable to the Rams because Wolford and Goff are quite different quarterbacks. The gangly, experienced Goff is an experienced pocket passer, while the shorter, speedy Wolford is a running threat with a slightly less powerful arm.

Rams fans have spent the week ardently debating whether the team should stick with Goff, the tested veteran who led them to the Super Bowl two years ago, or rest his recovering thumb and turn over the offense again to Wolford, the unheralded backup who showed ample potential.

The debate exists only because Goff and his offense have not excelled for the second straight season after those 2018 Rams had the lowest-scoring performance in Super Bowl history. 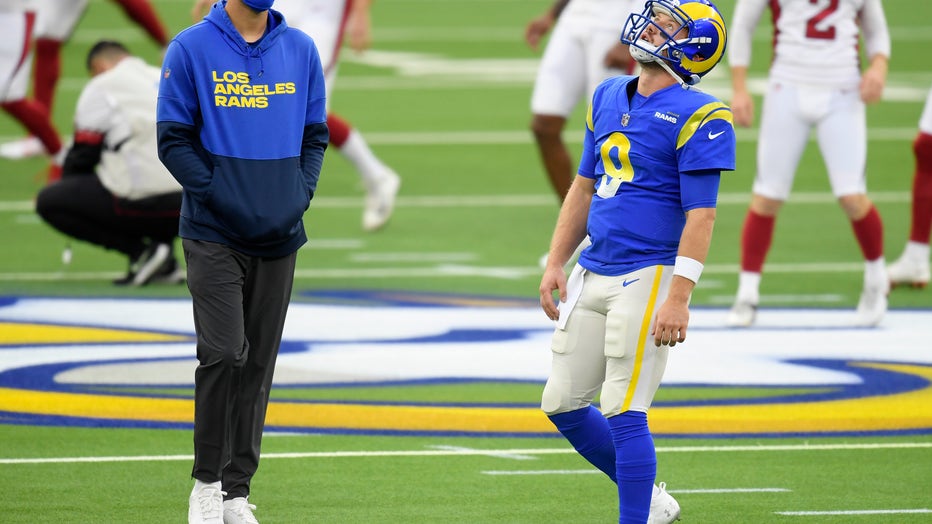 INGLEWOOD, CALIFORNIA - JANUARY 03: John Wolford #9 and Jared Goff #16 of the Los Angeles Rams during warm up before the game against the Arizona Cardinals at SoFi Stadium on January 03, 2021 in Inglewood, California. (Photo by Harry How/Getty Images

Goff’s completion percentage this season was actually his highest (67.0%) since his rookie year, yet his performances largely were unimpressive in keeping with the Rams’ overall offensive production, which sunk to 22nd in the NFL in total points.

Goff’s 7.2 yards per pass attempt was his lowest average under McVay, as was his 6.59 yards gained per pass attempt. Goff was 12th in the NFL in completion percentage, but 22nd in quarterback rating and 23rd in passer rating.

Turnovers have been a persistent problem for Goff since he arrived in Los Angeles, and they remained so even when McVay took the extraordinary step of calling him out on it earlier this season. Goff had seven fumbles along with his 13 picks — third-most in the league — in 15 games.

The Rams’ small element of surprise in withholding the name of their starting quarterback is even more valuable because the Rams and the Seahawks have faced each other twice already this season — including just two weeks ago.

"You always have a certain familiarity with a division opponent," McVay said. "There were some things that I was not pleased with (about myself) when we played them the last time that I thought I put us at a disadvantage, specific to the offense."

Pro Bowl cornerback Jalen Ramsey hopes the Seahawks don’t scheme to keep him away from receiver DK Metcalf this week, as they did last month in Seattle.

Metcalf had just two catches when Ramsey was matched up against him two months ago in Inglewood. In the rematch, Seattle managed to get him free to make six catches for 59 yards. 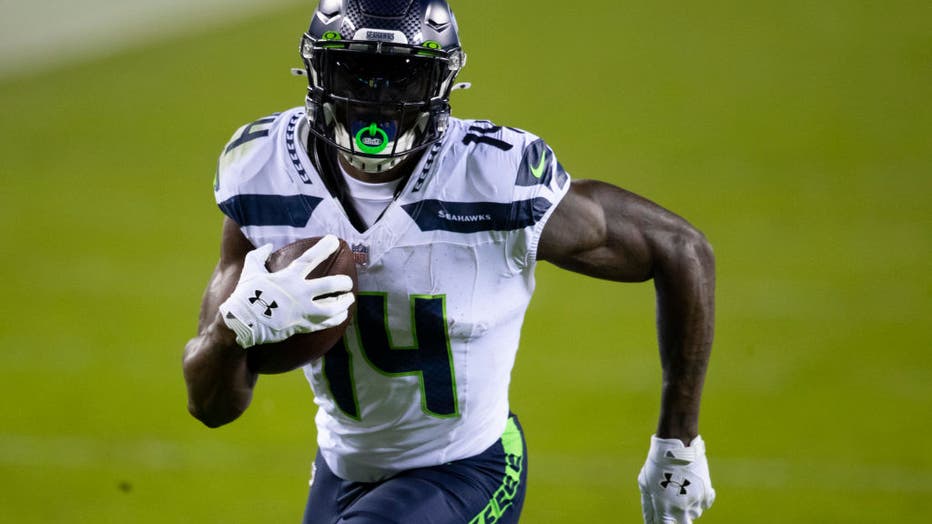 PHILADELPHIA, PA - NOVEMBER 30: DK Metcalf #14 of the Seattle Seahawks runs with the ball against the Philadelphia Eagles at Lincoln Financial Field on November 30, 2020 in Philadelphia, Pennsylvania. (Photo by Mitchell Leff/Getty Images)

"I feel personally that it should be like big on big," Ramsey said. "If you believe you have a top guy, I’m looked at as a top guy, we should be matched up against each other a fair amount of times. ... That’s what I would like to see, selfishly. I feel like that’s what big games should be. That’s what fans would like to see, and most competitors will seek that out, ask for that. I’m not saying that he didn’t at all, because I think he’s an extreme competitor, but their game plan was not to do that."