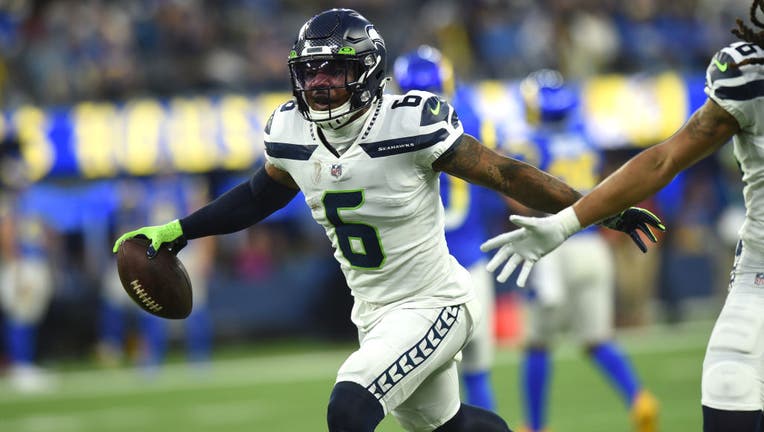 INGLEWOOD, CA - DECEMBER 21: Seattle Seahawks Safety Quandre Diggs (6) celebrates after catching a pass for an interception during an NFL game between the Seattle Seahawks and the Los Angeles Rams on December 21, 2021, at SoFi Stadium in Los Angeles,

While that’s a little bit of an exaggeration, this season was challenging in a different way for the anchor of the Seattle Seahawks defensive backfield.

There were the challenges on the field trying to fix a Seattle defense that rode a roller coaster of success and struggles for most of the season. And there was the challenge of playing alongside five different starting strong safeties at various point of the season, not to mention two rookie cornerbacks.

"It’s definitely tested me and it’s definitely made me better on how I’ve got to approach certain guys and how I have to be on my P’s and Q’s every day," Diggs said. "Because those guys are looking up to me and looking at me for answers a lot of the times."

Despite all those trials, Diggs finds himself where he always expected Seattle to be -- playing in the postseason for the third time since he was traded to the Seahawks back during the 2019 season. The Seahawks will face San Francisco in the NFC wild-card game on Saturday and will need another big day from Diggs if Seattle has a shot at upsetting its division foe.

It will help Seattle’s defensive overall that strong safety Ryan Neal is expected to play after missing the final three games of the regular season with a knee injury.

"I’ve been waiting forever," Neal said. "It has been painful watching my boys go out and have fun without me, but I’m glad to be back here just trying to make my way back."

Neal was one of the five strong safeties that Diggs played alongside this season and the one that played the best. The season started with the expectation that Diggs and Jamal Adams would patrol the backend for Seattle, only to see Adams suffer a season-ending knee injury in the opener. Josh Jones stepped in for a time, before Neal took over and took control of the position for most of the season.

Those plans were derailed in Week 13 when Neal suffered a knee injury. He was able to play through it for two more games, but the quick turnaround between a Sunday and Thursday game aggravating the knee issue and kept him sidelined the past three weeks.

With Neal out, Seattle used the combo of Teez Tabor and Johnathan Abram playing with Diggs. And it’s likely with Neal still not fully healthy that some combo of all three are used against the 49ers.

"He’s been a really active part in what we do and has a great spirit in what we do," Seattle coach Pete Carroll said of Neal. "I’m really happy that he will get back and we will have a nice little rotation there at that spot if he makes it all of the way."

Of course, the Seahawks aren’t in the playoffs if not for Diggs. That’s a general statement about this play this season — he earned a third-straight Pro Bowl honor — but also for one specific play in the overtime win over Los Angeles last Sunday.

After Seattle failed to score on the opening possession of overtime, the Rams needed just a field goal to win and end the Seahawks playoff hopes. On second-and-15 from the Rams 21, wide receiver Van Jefferson flashed open on a deep route. The play call confused Seattle’s defense and Jefferson was uncovered waiting for the pass from Baker Mayfield.

"As I saw the play develop, I was sitting there looking and was like, ‘Oh God. There are eight people in protection and it’s a two-man route. He’s going to be back there cooking steaks,’" Seattle defensive coordinator Clint Hurtt said. "My eyes transitioned back there, and I saw 12. I was like, ‘Oh no.’"

But Hurtt also saw Diggs sprinting to make up ground and when Mayfield’s throw was slightly underthrown, Diggs was able to make a game-saving interception.

"It was phenomenal. Ball skills is a unique trait that I think doesn’t get talked about enough on the backend and Quandre’s ball skills are through the roof. He’s unbelievable with that," Hurtt said.