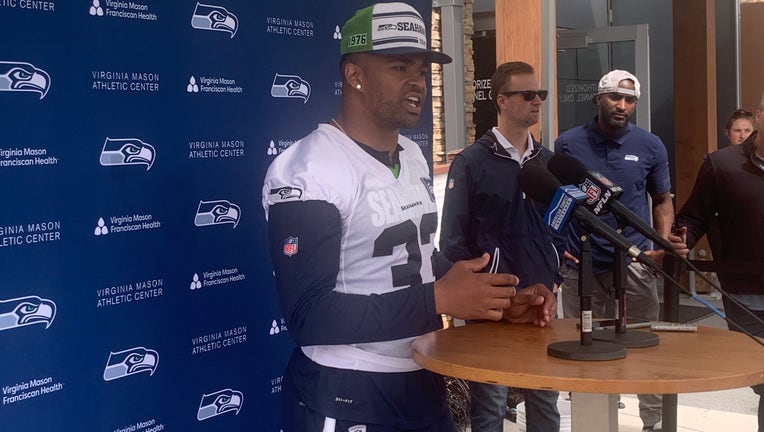 Seahawks safety Jamal Adams speaks with reporters after a practice at the team's veteran mini-camp at the Virginia Mason Athletic Center on June 7, 2022. (photo by Curtis Crabtree / FOX 13)

RENTON, Wash. - Seattle Seahawks safeties Jamal Adams and Quandre Diggs are both closing in on being back to 100 percent after undergoing surgeries at the end of the season.

Diggs had to have surgery just two days after the end of the season to fix a broken leg sustained in the final quarter of the final game of the season against the Arizona Cardinals.

Meanwhile, Adams season came to an end in December as a torn labrum and additional damage in his shoulder become too much to play through. Adams would also have surgery on two injured fingers on his left hand that had been a constant problem over the last two seasons.

After continuing their recoveries away from the team through the voluntary workout stage of the offseason, both players were back with the team for mandatory mini-camp on Tuesday.

"God is good man. I'm back. I'm back, man. I'm feeling good. Just going to take it day-to-day and obviously be ready for training camp," Adams said after practice.

Neither Diggs or Adams took part in Tuesday's practice. They both did participate in the team's walkthrough ahead of the full workout, however.

Diggs flew to Green Bay to have surgery with Packers team doctor and foot specialist Dr. Robert Anderson after he fractured his fibula against the Cardinals. Wide receiver Tyler Lockett accompanied Diggs from Phoenix to Green Bay for the surgery.

"Seven-eight minutes (left) in the game, you break your leg when you're thinking about the offseason," Diggs said. "So it was just a lot of different thoughts. But I mean, my teammates, just be by my side, my coaches be by my side, and it was dope to be able to have one of my best friends by my side during those tough times and flying the Green Bay with me. And so, you know, it was dope. The guys helped me down. And, you know, Lock did a lot for me that week after surgery, so it was cool."

It's the second straight year Adams has had to have shoulder surgery. He also injured his shoulder in his first season with Seattle in 2020.

"Man, it's been it's been a toll man, you know, but it's temporary," Adams said. "You know what I mean? Sometimes you go through things in life that you really didn't want to go through. But you know, at the end of the day, it made me stronger mentally, and physically. So I'm just looking forward to the challenge man."

Additionally, Adams had his two middle fingers on his left hand fused as they would frequently become dislocated.

"My first year when I got here, dislocated my ring finger probably about 10 times and the other one, probably about 12 (times). So I've been dealing with that. I didn't really say much. Let everybody talk about it, whatever. But you know, it's good now and they're in trouble.

"It's tough, man. I played with one arm damn near for two years. But that's no excuse. At the end of the day it was tape it up, let's go."

With training camp still seven weeks away, Diggs and Adams should both be fully ready for the start of the 2022 campaign.

"I mean, it felt good. It's always good to be around the guys," Diggs said of going through walkthrough on Tuesday. "I mean, it's a blessing to be able to be back out here and playing. What is it five months? So I mean, I'm right on schedule. I'm feeling good. So, man, we'll see."

Seahawks OTAs: What to expect from new defense

The Seattle Seahawks are changing their defensive scheme under new coordinator Clint Hurtt. What are those changes going to look like?