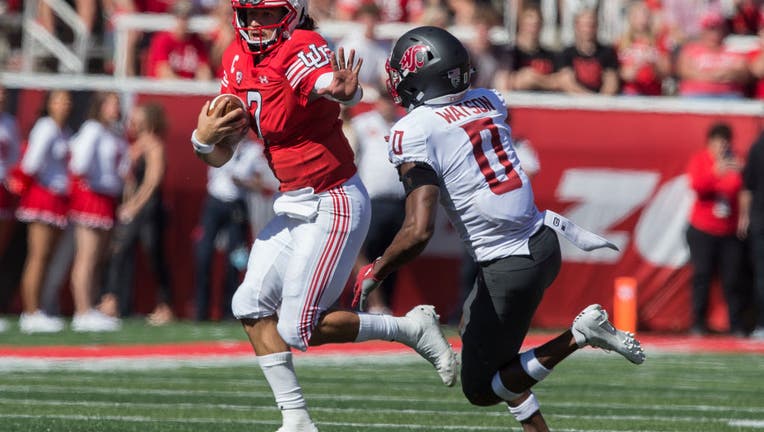 SALT LAKE CITY, UT - SEPTEMBER 25 : Cam Rising #7 of the Utah Utes rushes out of the pocket under pressure from Jaylen Watson #0 of the Washington State Cougars during their game September 25, 2021 at Rice Eccles Stadium in Salt Lake City, Utah. (Pho

SALT LAKE CITY - TJ Pledger rushed for 117 yards and the go-ahead touchdown as Utah came from behind to beat Washington State 24-13 on Saturday afternoon in the Utes’ Pac-12 opener.

Pledger, a transfer from Oklahoma who only had 11 yards coming into the game, ran 20 yards for a touchdown with 4:53 to play.

"After the game, I was holding my daughter and had tears in my eyes. College football is not easy, you go through ups and downs, and the ones who are able to remain steady and just keep putting their best foot forward every day, they end up being successful," said Pledger, who had all his yards in the second half after starter Micah Bernard left with an upper-body injury.

Clark Phillips took an interception 54 yards for a score to clinch it with 2:19 remaining.

The Cougars (1-3, 0-2 Pac-12) forced seven fumbles, recovering three, with at least two others saved by replay. The last one came with 10:18 to play when Daniel Isom hit Chris Curry just before he crossed the goal line and Travion Brown recovered in the end zone.

The WSU players were dealing with more than what was happening between the lines. Early Saturday morning near the WSU campus, one person was killed and Brandon Gray, a junior wide receiver, was also shot and is in serious but stable condition. The news shook the travel team who was already in Salt Lake City.

"We have so much respect for this team for how they played. I know we didn’t win. I know we weren’t great. But for them to go out and play as hard as they did with the news they got this morning about their teammate I think is a tribute to their character. All we can do right now is pray for Gray," WSU coach Nick Rolovich said.

Jarrett Guarantano was 25-of-36 passing for 248 yards but struggled to move the Cougars offense in the second half.

Meanwhile, the Utes (2-2, 1-0) shook off their fumble fingers and made all the big plays in the fourth quarter. Before the Utah offense got moving, the defense kept the Utes in the game with eight sacks and three interceptions.

"The defense played unreal. They did their job and then it was just up to offense to hold up their end of the bargain," Utah QB Cameron Rising said.

Devin Lloyd, who also had three tackles for loss, jumped a bubble screen and intercepted Gaurantano’s pass after tipping it. But backup QB Ja’Quinden Jackson fumbled two plays later and Jaylon Watson recovered for the Cougars on their 8-yard line.

On the first play of the second half, Ron Stone Jr. knocked the ball from Utah’s Micah Bernard and Christian Mejia recovered. Two plays later, Guarantano connected with De’Zhaun Stribling for a 26-yard TD and a 13-7 lead.

After back-to-back losses, former Utah QB starter Charlie Brewer was told he’d been demoted and he left the program on Monday.

Rising, who had 137 yards passing, got his first start since last season’s opener against Southern Cal when he injured his shoulder in the first quarter. Though he finished strong to force triple-overtime last week at San Diego State, the Utes again struggled to move the ball through the air with just 26 yards passing at halftime.

For the first time this season, the Utes brought extra pass rushers but that left the middle of the field open for WSU. Adjustments in the second half and a stronger rush quashed any chance of a Cougar comeback.

"We got after the quarterback which is a plus because we hadn’t done a lot of that this year and we really did a nice job with eight sacks. That’s a complete turnaround," Whittingham said.

Whittingham also said that in addition to losing three defensive starters last week, the Utes had three safeties injured during the course of this game — Vonte Davis, Brandon McKinney and Cole Bishop. "We didn’t have any more safties than the two that finished it," he said.

Utah’s lone scoring drive of the first half consisted of all rushing plays — highlighted by Rising’s 31-yard scamper and capped by Jackson’s 2-yard TD run.

Washington State: The Cougars dominated time of possession but only gained 106 yards in the second half. Max Borghi had 42 yards rushing before leaving in the second quarter with a left arm injury and the WSU ground attack struggled the rest of the way while Guarantano was under constant pressure. Right tackle Abraham Lucas said, "I think the biggest thing was the lack of focus up front. Bad things happened."

Utah: The Ute offense still doesn’t look like a well-oiled machine, but Utah rolled to 248 yards in the second half and was bolstered by another stout defensive performance. "We squandered a lot of opportunities, for sure. We had fumbles, red-zone scoring chances where we didn’t capitalize and so there’s a lot we need to work on," Whittingham said.

Washington State: The Cougars play on Saturday at California

Utah: The Utes have a bye next week before visiting USC on Oct. 9.