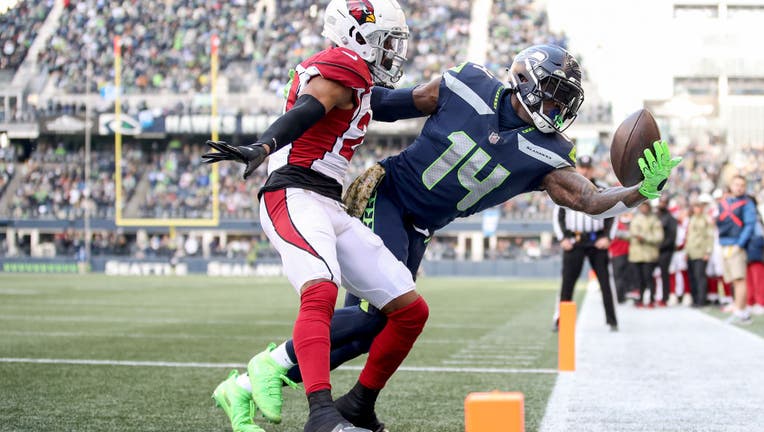 SEATTLE, WASHINGTON - NOVEMBER 21: DK Metcalf #14 of the Seattle Seahawks attempts to make a catch in front of Marco Wilson #20 of the Arizona Cardinals in the endzone but is unable to get both feet down during the second quarter at Lumen Field on No

GLENDALE, Ariz. - Arizona still has a shot at the NFC West title, the No. 2 seed in the playoff bracket and home-field advantage in the first two rounds of the postseason.

How much the Cardinals are willing to risk for those benefits remains to be seen.

Arizona has already clinched a playoff spot for the first time since 2015 heading into its homee game against the Seattle Seahawks on Sunday in the regular-season finale for both teams. The Cardinals (11-5) can win the NFC West if they beat the Seahawks and the Rams lose to the 49ers.

But the Cardinals also have numerous players dealing with nagging injuries, including running backs James Conner (heel) and Chase Edmonds (ribs/toe). Coach Kliff Kingsbury has been tasked with weighing the risks and benefits of playing them against the Seahawks.

"We want to win the game. That’s our goal," Kingsbury said. "We felt like we made strides last week and we want to keep that momentum going. That’s huge rolling into the playoffs to try to be playing some of our best football.

"We’ll be smart about some of those guys that are a little banged up, knowing our ultimate goal."

Seattle (6-10) enters the game in an odd spot for the franchise: out of the playoff hunt. It’s just the second time in the past 10 seasons the Seahawks won’t be in the postseason.

But they looked good last week against the Detroit Lions, rolling up a 51-29 win. Coach Pete Carroll said regardless of postseason status, it’s important to him that his team plays its best at the end of the season.

"It’s a big deal and we are going for it," Carroll said. "The whole idea, all along the process, is to get to this game so that you can play at your best and win the last game of the year."

Seattle QB Russell Wilson has a chance to join some elite company with a victory and some yards through the air.

A victory will move Wilson will past Peyton Manning for the most wins in a QB’s first 10 seasons, regular and postseason combined. Both are tied with 113 currently. Wilson can also join Manning as the only quarterbacks with 3,000 yards passing and 20 TDs in each of their first 10 seasons. Wilson needs at least 125 yards passing to reach 3,000 for the 10th straight season.

Of course, hanging over all these records is Wilson’s future in Seattle. He’s under contract for two more seasons, but this offseason may be the most likely time the Seahawks could consider moving their franchise QB.

Through 16 games, the Cardinals have shown they’re pretty good at just about everything.

It’s all part of the three-year evolution of Kingsbury, who came to the desert with an Air Raid reputation. The Cardinals do like to throw the ball around but they’ve turned into a much more balanced roster.

While Bobby Wagner is deservedly getting recognition for his big season with a career-high 170 tackles, one of his teammates is right behind him. Second-year linebacker Jordyn Brooks has improved significantly as the season has progressed and is proving to be an equally equipped tackler as his teammate. Brooks has 165 tackles going into the season finale and he has become a much better pass defender from the start of the season to now.

Brooks had 15 tackles in the first meeting with Arizona and Wagner had 13. It remains to be seen if Wagner will play after suffering a knee sprain last week against Detroit.

The Cardinals have received a unlikely boost from young receiver Antonie Wesley, who has caught his first three career touchdown passes in the past two games.

The 6-foot-4 Wesley played for Kingsbury in college when both were at Texas Tech. After the coach moved to the NFL, Kingsbury was the one who gave the undrafted receiver his first real shot at playing time in the pros.

When the 24-year-old Wesley caught his first NFL touchdown on Christmas Day against the Colts, he ran to the sideline and handed the ball to Kingsbury.

No running back in the league has been more productive since Week 14 as Seattle’s Rashaad Penny.

Finally healthy and given a chance as the starter, Penny has responded with 481 yards rushing and five touchdowns in the past four games. He ran for 137 yards against Houston, had 135 against Chicago and capped the run with a career-best 170 yards last week against Detroit.

Most of his yards have come against subpar competition -- the Texans, Bears and Lions were all ranked in the bottom half of the league in rushing defense. Which is why this week against Arizona is an important test to see if Penny can continue this hot streak against one of the better run defenses in the league.

"I’ve seen guys across the board be excited for him, partially because he is such a good player and a dynamic aspect of our team right now, but also because they know what he’s overcome," Carroll said.