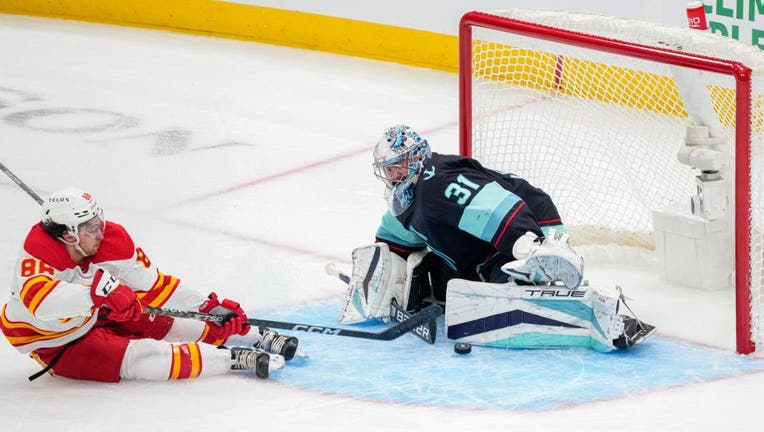 SEATTLE, WASHINGTON - DECEMBER 28: Philipp Grubauer #31 of the Seattle Kraken makes a save on an attempt on goal by Andrew Mangiapane #88 of the Calgary Flames during the first period of a game at Climate Pledge Arena on December 28, 2022 in Seattle,

SEATTLE - A season-high 41 saves from Philipp Grubauer wasn't enough for the Seattle Kraken as Jonathan Huberdeau's goal with eight minutes left to play gave the Kraken a 3-2 loss to the Calgary Flames on Wednesday night.

Huberdeau corralled a deflected a shot with space in front of the net and beat Grubauer to give the Flames a lead the Kraken couldn't answer. Huberdeau's goal came on the heels of a big penalty kill effort for Seattle. The Kraken killed off the penalty successfully only to have Huberdeau's goal deliver the win for the Flames.

Grubuaer's 41 saves were not only a season-high, but a career-best in a Kraken uniform, surpassing a 38-save effort last season against the Tampa Bay Lightning.

"I think it was awesome," said Jamie Oleksiak, who scored second goal of the night for Seattle. "I mean, arguably the sharpest guy tonight and I think he kept us in the whole way. So would have been nice to get him the win."

The Flames out-shot Seattle by a 15-6 margin in the final period. Grubauer headed for the bench with 1:24 left to play and a few chances for the Kraken with an empty net behind them were unable to beat Flames goalie Dan Vladar to force overtime. Vladar made 29 saves on 31 shots for Calgary.

As they did in their last two home games against Winnipeg and St. Louis, the Kraken benefited from an opponent who had played the night before. Calgary played the Kraken's next opponent – the Edmonton Oilers – Tuesday night at home and lost 2-1 before traveling to face Seattle tonight.

But unlike Winnipeg and St. Louis, the Kraken weren't able to turn that advantage into a victory. They drop a game to a Pacific Division rival with Connor McDavid, Leon Draisaitl and the Oilers coming to town on Friday. Calgary moves by the Kraken in the standings as well with 41 points, though they've played four more games than Seattle.

"We were below the bar in the second half of the game. And we have three or four guys that are below the bar, it's going to be difficult to win these types of hockey games," Hakstol said.

Dillon Dubé tipped a Noah Hanifin shot in front of the net and the puck caromed off of Grubauer and spit out to the side of the net for Tyler Toffoli to give Calgary a 1-0 lead in the first period.

The Kraken managed to tie it before the end of the period. Jordan Eberle made a great pass from behind the net to Ryan Donato in front of it, who hammered home a goal off a rebound of his own shot attempt to make it a 1-1 game.

Jamie Oleksiak scored just 1:14 into the second period to give Seattle the lead. Oleksiak skated in on net off a pass from Eberle and beat Vladar to make it a 2-1 game.

"They were pretty tight (defensively)," Oleksiak said. "I think Ebs was coming up the wall, jumped through, was able to get a step on the guy (Huberdeau) and then it was a matter of kind of getting through the screen."

Flames head coach Darryl Sutter used his timeout after Oleksiak's goal to settle his team and try to halt momentum. It didn't immediately seem to pay of as Brandon Tanev had a pair of breakaway chances on the same shift shortly afterward. Vladar saved the first and Tanev's second chance went off the crossbar and out to his visible frustration.

A high-sticking penalty on Carson Soucy put the Flames on the power play and they capitalized to even the game up once again. Nazem Kadri deflected a shot from Elias Lindholm between the legs of Grubauer to make it a 2-2 game midway through the period.

"The issue in the second period is getting to the 10-minute mark, having great momentum, a lot of energy in the building, taking an undisciplined penalty, and that one costing us. So those are the things. We've got to fix those things," Hakstol said.

The Kraken were then called for too many men on the ice when it appeared they only had the required five skaters off the bench. Matty Beniers touched a puck heading to the bench and the Flames bench shouted for a penalty and got it to Seattle's immense frustration. The Kraken managed to kill off the penalty and get into the locker room tied.

"I don't know what the hell that was. I mean, we had five guys on the ice," Hakstol lamented after the game.

"We didn't have too many men on the ice tonight. … That was the call. We had five players on the ice."

The Flames pressure built throughout the third period before Huberdeau's goal delivered the breakthrough.

Seattle has two more games at home against Edmonton and the New York Islanders before a season-long seven-game East Coast road trip.