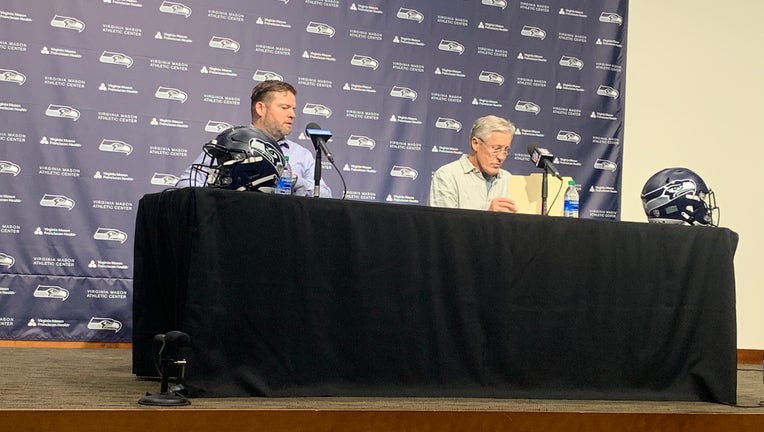 Seahawks GM John Schneider and head coach Pete Carroll sit down to discuss the trade of Russell Wilson to the Denver Broncos at the Virginia Mason Athletic Center on March 16, 2022. (photo by Curtis Crabtree / FOX 13 Seattle)

The team also indicated rather heavily that it was Wilson's desire to move on that fueled the trade discussions that culminated with the best quarterback in franchise history now playing football in Denver.

"Russell was looking for a second shot," Carroll said. "As I look at it now, he was. 'Is there something else out there?' And he's got his second shot too. He's got he gets a second shot at the NFL. We wish him the frickin' very best."

The Seahawks trade of Wilson to the Broncos became official at 1 p.m. PT on Wednesday with the start of the new league year in the NFL. The deal sent Wilson and a fourth-round pick to the Broncos in exchange for two first-round picks, two second-round picks, a fifth-round pick, Lock, tight end Noah Fant, and defensive tackle Shelby Harris.

Wilson, in his first remarks in Denver on Wednesday, claimed the desire for a trade was "mutual" without elaborating much further. In a statement released with comments from Carroll, general manager John Schneider and team chair Jody Allen announcing the deal, all three pointed to Wilson's desire for something different.

"While Russell made it clear he wanted this change, he made Seattle proud and we are grateful for his decade of leadership on and off the field," Allen said in a statement. "We look forward to welcoming our new players and to everyone being fully engaged while working our hardest to win every single day. I trust our leadership to take us into the future, and know we all wish Russell the very best."

Despite trading away Wilson, Carroll was emphatic in saying they aren't approaching their immediate future as a rebuilding situation. They still want to win and do so immediately.

"We look at this just like every other year. We're trying to build a championship frickin' football team right now," Carroll said thumping his finger into the table for emphasis. "There's no future, we'll do it somewhere down the road. We don't think like that."

What has become clear is that Wilson and the Seahawks were no longer pulling together in the same direction. Wilson has expressed his desire to have more and more of the offense put on his shoulder and clamored for the chance to "cook" with the ball in his hands. Carroll said Wednesday he wants the quarterback to be a point guard and get the ball to the right place.

"What we need in our offense is the same thing we've always needed whether it was Carson Palmer or Russell Wilson. We need a point guard," Carroll said. "We need a guy that plays the game and moves the football around to the guys that are open and does all of the things that manages the game so that we can play great football.

" Because we're going to win with defense. We're going to win with how we play on special teams. We'll run the football to help the whole thing fit together. That's never changed. It's never been a philosophy that we needed to alter other than to continue to grow and make dynamic and present and current and all. And that's what we're looking for."

Both Carroll and John Schneider spoke highly of Lock and the belief that he could be that type of player in Seattle.

"We loved him in the draft. … He goes in his first year, finally plays his first five games, and he goes 4-1 In his first season, his rookie season. All the promise, all that you would hope to see," Carroll said.

"The numbers and stuff show he's going to have a great run in his career. And the next few years didn't work out very well. He battled his tail off and competed his tail off, but it hasn't worked out. Is this a second chance for Drew Lock? Heck yeah, it is. It's an absolute clear second chance for him to show, to take us back to where we knew him to be, and we'll find out."

Added Schneider: "We really liked him coming out. He can move in the pocket, has a hose (of an arm). We're really excited to get him into our culture, into our building."

Broncos general manager George Paton said that trade talks around Wilson had taken place over the last month. Carroll and Schneider both downplayed any discussions surrounding Wilson during the NFL Combine at the end of February. Carroll stated they had every intention of Wilson remaining as their quarterback at that time.

Then the trade from Denver came together.

"I said a million times to you guys that I had no intention of moving on with the quarterback," Carroll said. "I love Russ and loved him in the program and that's the way I was committed to doing it. And I felt that way all the way throughout. And then the opportunity became available where, OK, there's a business opportunity here. We can see it. Now we have a chance to take a look, and we did. We took a look and were surprised at how good a deal came to us.

"It's not about blaming anybody or forcing the issues, any particular we had. Everybody had to agree to this eventually, and so we did. Really, it opened up some doorways that we didn't think existed really at the time."

Schneider was asked directly if Wilson had told the team he wouldn't sign another contract with the team.

"I don't know if those were the exact words but we were under the impression that there wouldn't be a long-term extension," Schneider replied.

So with Wilson not looking to stay in Seattle long-term beyond the 2023 season, the Seahawks accepted the reality of moving him to the Broncos for three players and a haul of draft picks.

"We've had tremendous support from our ownership. Jody was incredibly tuned in," Carroll said. "She supported us, challenged us, demanded that we were sure what we were doing, and we could account for all of the thoughts in the background and all of the work that we needed to do to put this together."

And speaking of second chances, Carroll brought up the possibility of Colin Kaepernick as well.

The former San Francisco 49ers quarterback hasn't played in the NFL since the end of the 2016 season. His protests against racial injustice and police brutally by kneeling during the playing of the national anthem caused heated national debate and led Kaepernick to believe he was being blackballed from the NFL. He filed a lawsuit against the NFL that was settled in 2019.

Carroll said Kaepernick had reached out to him recently. He also threw passes to Seahawks receiver Tyler Lockett and his brother, Sterling, in Texas earlier this week.

Carroll wouldn't commit any further regarding whether they'd get Kaepernick a chance.

"I don't know," he said. "He's making a remarkable bid for it to sustain this conditioning over the four years that he'd been out, and going on five. Who knows? I don't know. We'll see."

Wednesday was the first day in 10 years Russell Wilson wasn't a part of the Seahawks roster. It's a new era ahead for Seattle as the last players that were a part of their Super Bowl roster are now gone. For Carroll and the Seahawks, the goal hasn't changes. Even if the players have.

"Winning frickin' football games. And a bunch of them. Really. And getting the feeling (again). Last year kind of sucked," Carroll said.

"We're just going right back to business. We're going for it."