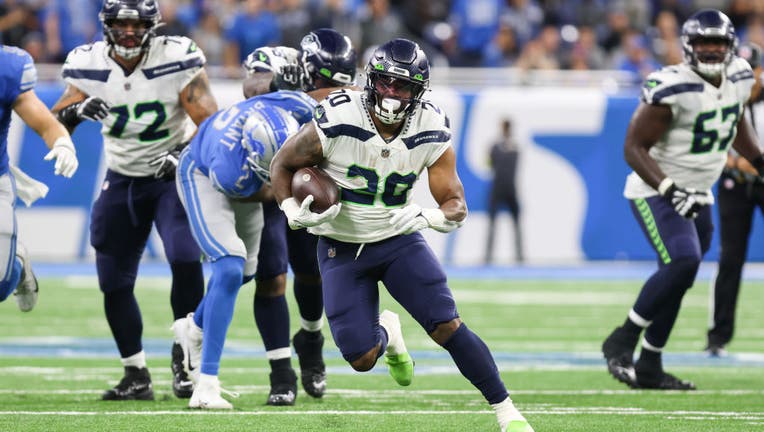 DETROIT, MI - OCTOBER 02: Seattle Seahawks running back Rashaad Penny (20) runs with the ball during the third quarter of an NFL football game between the Seattle Seahawks and the Detroit Lions on October 2, 2022 at Ford Field in Detroit, Michigan. (

Carroll said Monday that he has seen some improvements from the unit, but the continued allowance of explosive plays to opposing offenses has been a major problem.

"We have to get better at our stuff, we have to get more consistent because what’s happening is that the explosive plays are affecting drives as they always do. If you have an explosive play, the odds of scoring goes way up. That’s the big concern right now," Carroll said.

"We need more time to figure out how we are zeroing in. We have to get better at what we are doing. I really like what we are doing, but we have to make sure that everyone is solid and eliminating the errors. That’s how the big plays are happening, so that’s where our focus is."

The Lions had seven plays of at least 21 yards in Sunday's game. An 81-yard catch-and-run from tight end T.J. Hockenson and a 51-yard touchdown run from running back Jamaal Williams were the most significant for Seattle's defense. Hockenson also had catches of 32 and 24 yards, Tom Kennedy had a 28-yard reception and Josh Reynolds added a 26-yard catch as well.

Craig Reynolds also had a 21-yard rush to add to the list of big plays for Detroit.

The 72 yards on the two carries by Williams and Reynolds made up nearly half of the Lions' rushing total of 145 yards in the game. Take those two runs out, and Seattle's run defense allowed just 3.2 yards per carry on 23 attempts. Of course, it isn't that simple, but Carroll believes there were improvements made overall on Sunday.

"We fit better off of the down three (linemen)," Carroll said. "They really tied down the middle of the defense and did a good job. We really can count on our big dudes inside. They can get that done. It’s us fitting, whether it’s the linebackers or the safeties fitting up, fitting properly, and making sure that we are in the right leverage positions to make the tackles.

"I feel really confident in what we are doing in the middle, and those guys can get that job done. That is a good step forward, and there were a bunch of plays where they didn’t make much of anything."

The run defense was the most concerning aspect for the Seahawks through the first three games. The Denver Broncos, San Francisco 49ers and Atlanta Falcons combined to allow over five yards per carry on the ground. The struggles led Seattle to make a change to the starting lineup on Sunday with Darryl Johnson replacing Darrell Taylor as the starting outside linebacker to help them against the running game.

But Johnson left the game with a foot injury and Williams' 51-yard came on a run directly at Taylor's edge of the defense. Johnson had been playing well since joining Seattle via a waiver claim at the end of training camp. He earned his way into more playing time and now will miss some significant time with the injured foot.

"He has an injury that is going to take a while. I don’t know specifically," Carroll said, though he added Johnson will return this season. "I do think it’s a stress fracture kind of thing that he is dealing with. That’s somewhat of a significant injury.

"I was really fired up about him in part of our plans. He’s big, strong, versatile, active, smart. You know really one of our guys, so I’m really disappointed that he got banged up. He was the one guy that really got hurt in this game."

Johnson's injury will force Taylor back in the lineup or lead the team to make other adjustments to the personnel up front. Rookie Boye Mafe could take on an even larger role or L.J. Collier, set to return this week from injured reserve, could be part of the solution as well. Collier has been out since mid-August with an elbow injury sustained in the team's mock game scrimmage.

"We’ve still got some competition that’s why we are rolling guys around to see who’s starting," Carroll said. "All of our guys are going to keep playing. The guys that have been in there, I think Mafe played 30- something, 34 plays, or something like that. That’s getting going. We need more and we’ll keep rolling the guys and making sure that we are trying to keep our guys fresh. There is a chance that L.J. comes back this week. That will be good for us to get him back in the action and see where he goes in play time. I think we just need to keep working and keep finding our way and making sure we are getting all the right info so we can make the right choices."

The run game isn't the only concern, it was just the most obvious. When you give up 45 points, everything is a bit concerning after all. There were many explosive pass plays allowed to Jared Goff and the Lions as well despite being without Amon-Ra St. Brown and D.J. Chark at receiver.

"There is some growing and there is some maturing. Tariq (Woolen) had one a week ago and Michael (Jackson) had one this week, so those are our young guys getting a feel for it. We have to make sure to learn the lessons, and put some stuff to rest so we can make it harder on the opponent."

With Seattle's offense looking as comparatively strong as it has through the first month of the season, the Seahawks appear to be a group capable of competing for a playoff spot. That doesn't seem like it's a pipe dream through the first four weeks of the year. However, the defense has to improve for that to become a realistic outcome. Carroll has typically been able to find a way to fix defensive problems in recent years. He'll have to do it again this year.

– Pete Carroll singled out the performance of the offensive line from Sunday's win against the Lions.

Geno Smith wasn't sacked once, and Rashaad Penny helped lead the rushing attack to 235 yards on the round in scoring 41 offensive points against Detroit.

"It was really consistent pass protection-wise," Carroll said. "They did a fantastic job. Working together with the timing of getting the ball out and all of the different actions and movements that Shane (Waldron) had our guys doing helped, but the guys played really consistently across the board. We have to get rid of a couple of penalties and not give them stuff, but as the game wore on, you saw us develop more opportunities in the running game. They just did a really solid job. If we were giving out a game ball, I would give it to the offensive line."