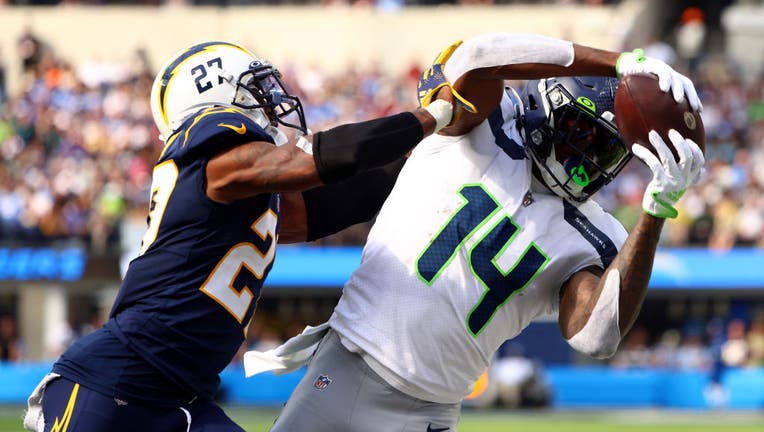 INGLEWOOD, CALIFORNIA - OCTOBER 23: DK Metcalf #14 of the Seattle Seahawks attempts a catch against J.C. Jackson #27 of the Los Angeles Chargers during the first quarter at SoFi Stadium on October 23, 2022 in Inglewood, California. The Seattle Seahaw

Metcalf sustained an injury to the patella tendon in his knee while landing hard on the artificial turf at SoFi Stadium in Sunday’s 37-23 win over the Los Angeles Chargers. X-rays were negative and Carroll said an MRI on Monday showed the injury to the tendon.

"Got a really good report this morning that he does not need surgery," Carroll said on Seattle Sports 710 AM on Monday. "He hurt his patella tendon some. And there's some thought that there's been an old injury and some stuff complicating it, but it's a great report. I was just with him in the training room, and he's really positive about it. And I don't know what that means in terms of coming back, and how soon and all of that, but his attitude is exactly where you would want it to be."

Carroll said that Metcalf wants to practice on Wednesday, though Carroll was rather quick to hit the brakes on that suggestion.

"I know he's really anxious to try to make his way back and, you know, in his mind he wants to try to practice Wednesday. I don't know if that's even possible. But he's still pretty sore today," Carroll said.

Metcalf had just one catch for 12 yards against the Chargers before the injury occurred on his second and final target of the game. He was covered by cornerback J.C. Jackson up the left sideline and came down hard on his knee. The Seahawks quickly ruled him out with a knee injury and he returned to the locker room on the back of a cart.

Carroll said they were not yet sure of the timeline for Metcalf’s injury, but it was still a mostly positive update on his status.

"Give us a couple days to let it cool down and see what's going on. He won't get extensive work on Wednesday regardless. We're going to take care of him and make sure we're doing the right thing. And we'll just see. Unfortunately we don't know," Carroll said.

The Seahawks are taking a look around for other receivers that are available at the moment, though Carroll said they’re going to move forward with the guys they have. Tyler Lockett, Marquise Goodwin, Dee Eskridge, Dareke Young and Penny Hart (hamstring injury) comprise the rest of the receivers on the active roster. Cade Johnson, Bo Melton, J.J. Arcega-Whiteside and Easop Winston are the receivers on the practice squad currently.

"We're looking at everything," Carroll said. "There's a lot of unknown right now about the situation. So we have to be open to the possibilities of whatever. I know John [Schneider]'s on it. We've talked about it some already, but we're going with our guys. That's what we're counting on and we're gonna count on these guys to come through and do a good job."

Linebacker Nick Bellore and right guard Phil Haynes each left Sunday’s game with concussions and will have to clear league protocol. Defensive tackle Poona Ford briefly left with a foot injury and linebacker Uchenna Nwosu had his calf cramp up in the fourth quarter.