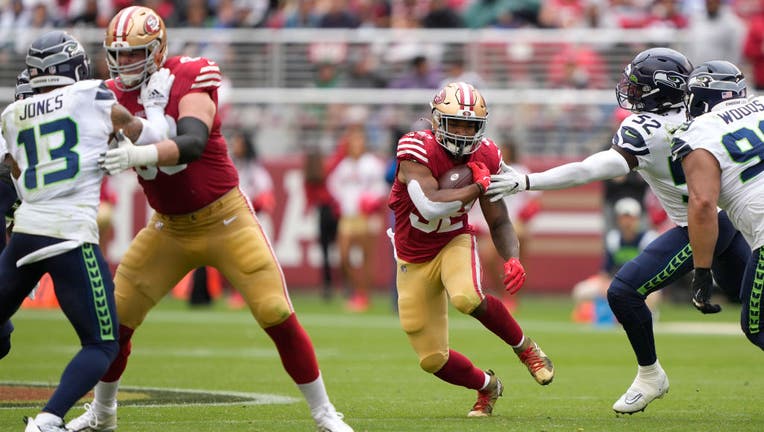 SANTA CLARA, CALIFORNIA - SEPTEMBER 18: Tyrion Davis-Price #32 of the San Francisco 49ers runs with the ball against the Seattle Seahawks during the third quarter at Levi's Stadium on September 18, 2022 in Santa Clara, California. (Photo by Thearon W

Speaking with reporters on Monday, Carroll said they need to take the reins off the offense after the unit was held scoreless by the 49ers and hasn't scored any points in six quarters dating back to the season opener against the Denver Broncos.

"It's such a broken record. When you don't convert you don't get enough chances, you know. We needed more (opportunities). And we've got to create them ourselves by the execution," Carroll said.

The Seahawks had just four games all of last year where they ran at least 60 plays offensively. They had two games where they ran fewer than 50 plays in a game, a pair of losses to the Arizona Cardinals at home and the Washington Commanders on the road.

Carroll said that they had concerns over whether rookie tackles Charles Cross and Abe Lucas would hold up against the 49ers pass rush led by Nick Bosa. The pair did well enough that Carroll said they should have lengthened the leash on the offensive attack.

"We didn't want to open it up and expose the tackles any more than we had to so that all kind of fit together. But they're holding up. They did a nice job in general," Carroll said. "Geno's in command of what's going on  and he's real accurate with his decision-making and all. I think it's just more freely taking advantage of what's going on rather than being concerned about our ability to hold up."

Seattle was held to just 216 yards of total offense by the 49ers on Sunday in the loss.

Meanwhile, fixing some issues stopping the run defensively are also on the docket for Seattle.

The 49ers rushed for 189 yards on the ground with Jeff Wilson Jr. going for 84 yards on 18 carries and Deebo Samuel adding 53 yards on four carries. That follows a game against the Broncos last week when Melvin Gordon and Javonte Williams combined for over five yards per carry in rushing for 101 yards on 19 carries.

"We've been inconsistent on the running game. It was all or nothing. We knocked the heck out of it and stufffed it at the line of scrimmage, or we gave them some run space. It's about the discipline of the fits and the consistency of that. At times we were alright," Carroll said.

The 51-yard run from Samuel was the big play for the day for the 49ers offense and it included Darrell Taylor missing a tackle in the backfield that would have stuffed the play for a loss.

"We've got the guy in the backfield. We got to get him down. It was Deebo Samuel and he's pretty notorious for getting loose and getting out of it, but that was the play that really rocks us with the numbers overall," Carroll said.

If you take out Samuel's run, the Seahawks allowed just 138 yards on 44 carries, which is just a 3.1 yards per carry average. But the Samuel run did happen and the 49ers had enough successful runs early to help them get rolling.

"We have to be more consistent in our fits and I think that's a little bit of the newness we're still working together to get stuff right," Carroll said in reference to the change in defensive scheme this season.

"We can see that the same plays we stopped at other times in the game, so we've got to find our consistency and that's not there yet. And there's no time. We have to get it done now. Atlanta runs the football. Their big guy back there (Cordarelle Patterson), he hammers it too and they have a similar type of running game and offense and all of that so we've got to get our act together quick."

Left guard Damien Lewis and defensive end Shelby Harris both left Sunday's loss to the 49ers due to injuries that kept them from returning to actions.

Lewis sustained a thigh bruise when he collided with a 49ers player on a catch-and-run from tight end Will Dissly.

"Damien's pretty sore," Carroll said. "He's got a good thigh bruise going here and we'll have to see how it transitions the next few days."

Harris had been listed on the injury report throughout last week with a back injury. He made it just a few snaps into the game Sunday before a gluteus issue sidelined him for the rest of the day.

"We'll have to wait and see. We don't know about that yet. He was no better today," Carroll said.