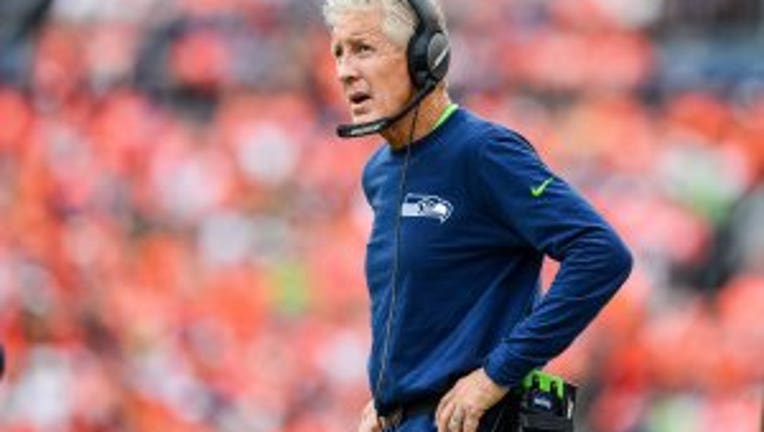 SEATTLE - Seahawks Training Camp kicks off in just a few days and Q13 FOX is the exclusive home for all things Seahawks - with interviews you won't see anywhere else as we head into training camp.

Sports Director Aaron Levine spoke with Head Coach Pete Carroll about his relationship with Russell Wilson and having one of the fastest groups of receivers Seahawks has ever had.

Levine: You talked about the communication you had with Russell Wilson this offseason, he says your relationship is stronger because of it. What was accomplished in those conversations that's made it that strong?

I think it was really obvious for both of us that we're on the right track and we're excited about it and couldn't wait to get started again.

Levine: He set a career high and pass attempts, completion percentage and touchdown passes last season, so what is the next step for him?

Carroll: I think that to be a 70% completion guy, I’ve been saying that for years, keep throwing it out there at him, and challenging him to get that done and we gotta be more efficient with the ball.

I don't want him taking those losses. It's so difficult to overcome those and so we're hoping the efficiency of the throwing game will be set [so] that we won't take as many minus yardage plays and we can keep taking advantage of all the plus things that come from the throwing game.

Levine: you also have a budding track star, D.K. Metcalf, you have Tyler and now you're bringing D’wayne Eskridge. Is this one of the fasts groups of receivers you've ever had here?

RELATED: Exclusive: Seahawks' Shane Waldron on what his style of offensive coordinating looks like

Carroll: Yeah this is about as fast as we've been and it's an exciting group you know because you know what you have in Tyler and D.K. and D’wyane’s got something to add. He’s explosive, he’s really quick getting out of his breaks and he has a great catching range too.  He doesn't have to be the whole show he just needs to be a complement. Freddie Swain’s gonna do a really good job, Penny and the kids outside ... it's a good position group for us, but I think D'wayne could add a little spark to us.

Levine: A couple significant changes this year, first a 17-game regular season, serious question how, the heck are you gonna break that up into quarters?

Carroll: Yeah I am really disappointed in that. I'm gonna have to make up a story or something there at the end. I’m going quarters until I can’t.

Levine: And then there’s the jersey number situation do you kind of feel like you’re coaching college again with Quandre Diggs wearing number 6?

Carroll: A little bit, back in the day you know recruits would say, ‘you give me this number and I’ll come to your school.’ I used to say ‘that’s not your reason for picking your college, setting up the future for the rest of your life. There's still that little college flair, that some guys have, this image that ‘I got to get into this number.’ Now some of the guys look pretty sweet in those single digits now. When you check out Quandre Diggs back there waring six, it looks like he was made to be wearing six back there you know. I don't know if looking at Carlos, in number eight, is gonna make a lot of sense to anybody but, it makes him feel really good. He’s gonna be coming off the edge just to show off, so whatever it takes.

Levine: Hopefully he looks as good as he did at Florida wearing the same number eight

Carroll: Yeah, it’s a big deal to him so I’m glad we could get that done.