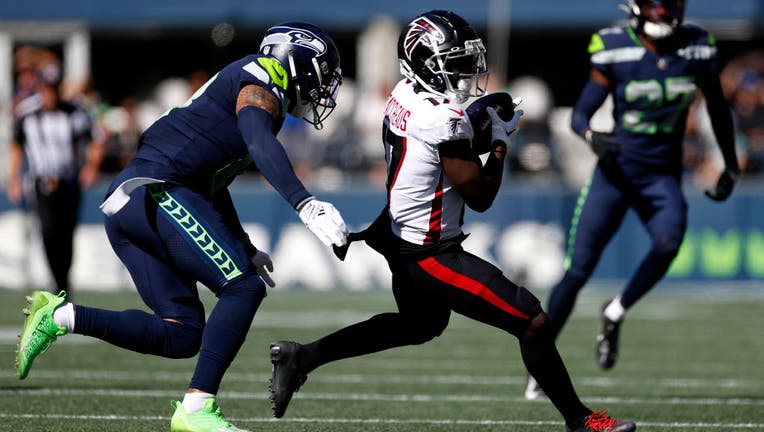 SEATTLE, WASHINGTON - SEPTEMBER 25: Olamide Zaccheaus #17 of the Atlanta Falcons runs with the ball after making a catch against Josh Jones #13 of the Seattle Seahawks during the second quarter at Lumen Field on September 25, 2022 in Seattle, Washing

RENTON, Wash. - Seattle Seahawks head coach Pete Carroll focused on his team's need to fix their issues in the running game on defense after a 27-23 loss to the Atlanta Falcons on Sunday.

Cordarelle Patterson rushed for 141 yards on 17 carries with a touchdown for the Falcons. Through three games this season, the Seahawks are allowing just shy of five yards per carry against opposing runners. The looseness of the run defense has made it very difficult for the team to get off the field consistently as they've forced just one three-and-out through three games played.

"We have to play with each other, play relative to each other better than we are," Carroll said on Monday. "And that's getting off the blocks at the right time and fitting at the right time and not giving them any added space that that gives those runners the chance to get rolling. Coming off the blocks is a really important part of it. Whether it's a linebacker or (defensive backs) coming off the edges with the guys that play the edge that Sam, will backers, you know, they have to get their job done."

Defensive end Quinton Jefferson pointed to similar issues Sunday night after the loss. Seattle has been attacked on the edges of the defense in the running game with runners either finding room to run on the perimeter or with cutbacks through holes in the Seahawks' front.

"It's right there. That's the NFL. It's a game of inches. It's a game of like one play can change the whole dynamic of the game, one inch can change the whole dynamic of a play. We got to do the little things right and longer than other teams. It literally is that. Because one inch outside your gap and the ball can hit for 40."

Carroll said tackling was not the issue against Atlanta. It was defenders finding ways to be in the right gaps.

"It was more fitting together and making sure that we're in the right spots and we're hitting our fits like we're supposed to," he said.

Carroll made it clear that he's willing to change up the personnel on the field to find a way to fix the run game problems as well. He said that rookie Boye Mafe and Darryl Johnson, who were paired together as rotational ends through Sunday's game, are pushing for more playing time.

"He did do well against the running game. He played the edge really well yesterday," Carroll said of Mafe. "We're looking to continue to add for him. He's looked like he's played strong, and he's been active and he's made a few plays in every game that he's been in and we just need to keep going with him and just keep the rotation going. I don't think we've found the exact rotation for us yet, but we're working on it.

Johnson had also played well in his snaps against the Falcons and San Francisco 49ers and is deserving of more chances as well.

"He's given us some stuff. And like with Boye, we want him to continue to be part of the rotation and keep rolling that thing. … "We want to use him. I want him to play more on early downs," Carroll said.

Those snaps would seemingly come at the expense of Darrell Taylor.

Taylor has really struggled against opposing run games so far. Opponents are running at his side of the line frequently and he's been unable to hold the point of attack consistently. Carroll pointed to Taylor's strip-sack of Marcus Mariota on Sunday as a sign of some of the things that Taylor is still doing well, but noted that he wants to keep a rotation going at the edge linebacker spots.

"He has continued to show the bright spots that we need to see. A great rush and a great forced fumble, great sack. He had some really good plays and some good hits," Carroll said of Taylor. "I like a rotation with our guys at this position. And we're trying to find out what's the right mix there. With Boye playing better and showing some good signs and us kind of falling for Bam (Johnson), you know, that combination of how we mix those guys is really something we're trying to zero in on."

While the defense was the focal point of frustration for the Seahawks, Carroll was quite pleased with the offensive showing against the Falcons.

Seattle put up 420 yards of offense and did many of the things Carroll usually attributes to winning football games. They won the time of possession battle and the turnover battle. Carroll points to games where they have a combined 50 completions and rush attempts as being highly predictive of success. Seattle had 53 completions and rush attempts on Sunday. They were over 50 percent on their third down conversion tries as well. That usually leads to victories.

The thing that's frustrating about it is that we had a lot of numbers that we generally kind of consider as one's that make a difference in the game. It didn't work out, you know. We're plus turnovers were over the 50 mark with completions and runs. We stayed in control of the ball. We had the ball more they did. I mean, there's a lot of things that would spell out going down and win the football game and we'd be feeling pretty darn good about it.

"But it didn't happen. So we're still battling and so we're gonna keep going in andkeep clawing and scratching at it until we get it right and match it all up on both sides of the ball play together well. So we're working at it."

"How could you not be fired up about what Geno has done?" Carroll said on Monday. "You know, he's done a great job for us. And so that's just one of the factors, you know, but it's a factor that was a question mark, and now you can see him. So really fired up about that."

Carroll said last week the team was going to loosen the leash on the offense a bit now that rookies Charles Cross and Abe Lucas have shown they can hold up well at the tackle spots on the offensive line. He was again pleased with their performance against Atlanta.

"I think the tackles continue to just show really a consistency that we're counting on. They're not wowed by what's going on. They're OK about it and they're handling it really well," Carroll said.

Smith and the offense responded with the additional faith by posting their best performance of the season. A few opportunities did slide away with three trips inside the Atlanta red zone forced to settle for field goal tries instead of touchdowns, but Carroll believes it points to bigger things ahead for the group."

"We're going places. And when we can function that clean on offense and you can count your QB to be that that much on it and to really do a good job taking care of the football as well. That gives us really big expectations. And so we just gotta get going. There's no time but the future looks bright."