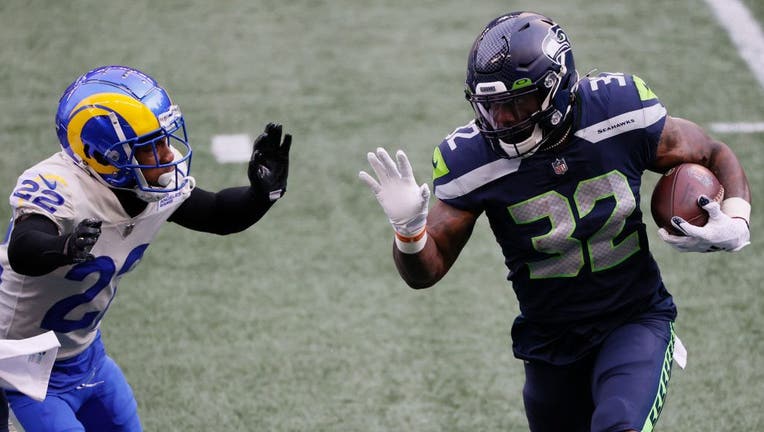 SEATTLE, WASHINGTON - JANUARY 09: Running back Chris Carson #32 of the Seattle Seahawks carries the football against cornerback Troy Hill #22 of the Los Angeles Rams during the first quarter of the NFC Wild Card Playoff game at Lumen Field on January

RENTON, Wash. - The uncertainty around the career future of running back Chris Carson for the Seattle Seahawks continues onward following his absence from the team's mini-camp this week.

Carson continues to recover from neck surgery late last year that brought an end to his 2021 season after only four games. While the Seahawks were optimistic at the time that Carson would be able to continue his career after surgery, the subject has become far more questionable since. Head coach Pete Carroll has been non-committal about Carson's chances of returning this year.

Two weeks ago, Carroll said that he expected to have more certainty around Carson's status later that week, only for that moment to pass without a resolution either. When asked about Carson's future on Thursday, Carroll's comments came off as more retrospective than optimistic about what's ahead.

"Our guys love this game that they grow up playing, and when they sense that there may be an end to it, it’s hard. It’s difficult, and it’s real," Carroll said. "And we’re going to love him through it and help him as much as possible, if that’s the case, like we do with everybody when it comes to the end of it. It’s inevitable. It’s coming, but it’s always too soon, so we’re trying to fight that off."

Carson has been absent for all of the team's offseason workout program and wasn't in attendance for this week's mandatory mini-camp, though he was an excused absence.

In case Carroll's comments earlier this spring weren't indication enough, the Seahawks decision to draft Ken Walker III in the second-round of the NFL Draft seemed like a clear sign that Carson's status was in doubt. If Carson and Rashaad Penny were both healthy and able to play this year, taking a running back that early would have seemed unnecessary. But if the belief was that Carson would have a difficult time returning to action, the selection of Walker suddenly made far more sense.

As for the checkpoint two weeks ago, Carroll said that the hope was that Carson would be given clearance to return to the field.

"That could have happened. That didn't happen," Carroll said. "So now we're into the next phase of it. We'll see what happens here. Just hold out good hope because he's worked really hard and he really wants to come back and all of that. But I can't tell you anything for certain now at this point. The fact that we could have known, given us the green light, here we go. That didn't happen."

Now Carson will have another checkpoint in two more weeks to see if he can get back to playing.

"That we're we're waiting for -- there's kind of a big assessment to be done and it's about two weeks from now from the docs and the surgeon and all that. They'll reconvene and see where he is and let us know," Carroll said.

Carson had surgery to fuse a disc in his neck that was causing him ongoing discomfort. Despite appearing in just four games, Carson spent many weeks trying to get back on the field without success. Ultimately, it was decided that he needed to have surgery.

Carroll said that Carson still hasn't been able to get all of his needed movement back as of yet.

"He still doesn't have full range in a couple areas of things that he's got and he's right at the cusp of getting there," Carroll said. "And the time is on is on him now, you know, can you beat the clock here a little bit. So he's close. He's really close. And he knows that and so, you know, he's frustrated that he couldn't show it this time around. But he knows, OK, here's our next loop. And so he's going for it just like our guys know how to do and we're all pulling for him."

Duing his evaluation two weeks ago, Carroll said he had a chance to sit down with Carson to discuss where he's at and how he's handling the situation.

"We had a real good chance to hang out with him and feel him, and he’s concerned because he wants to play," Carroll said. "He loves the game, and he’s a worker, you know. He wants to work and push and all that, [but] there’s some things that he was still a little bit restrained to do. So he wasn’t quite ready to do everything at that time, and it’s just hard on him."

"He’s been one of my favorite Seahawks ever. I’ve loved what he stood for and what he brought, and we’d love to have him back again. He’s a very special player and a very special competitor. We’ll keep our fingers crossed."