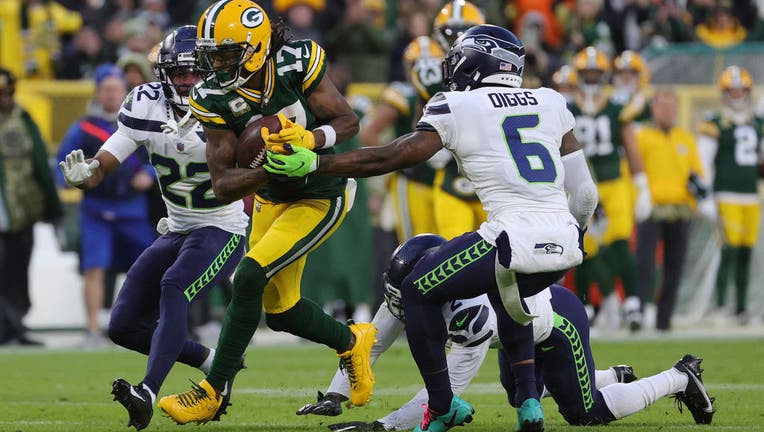 GREEN BAY, WISCONSIN - NOVEMBER 14: Davante Adams #17 of the Green Bay Packers runs with the ball against Quandre Diggs #6 of the Seattle Seahawks during the second quarter at Lambeau Field on November 14, 2021 in Green Bay, Wisconsin. (Photo by Stac

GREEN BAY, Wis. - Aaron Rodgers was uneven in his return from COVID-19 but did more than enough to support a standout Green Bay Packers defense in a 17-0 victory over the Seattle Seahawks on Sunday.

A.J. Dillon rushed for two fourth-quarter touchdowns for the Packers, who handed the Seahawks their first shutout loss in a decade.

A week after he was forced to sit out a loss at Kansas City because of a positive COVID-19 test and the subsequent revelation that he was not vaccinated, Rodgers went 23 of 37 for 292 yards and threw an interception in the end zone in the third quarter.

Rodgers did not practice all week and was cleared to play Saturday under the NFL’s protocols for unvaccinated players. The QB said before the season he was "immunized," and after his positive test, he detailed in an incendiary radio interview his reasons for seeking alternatives to vaccination and his skepticism about the shots’ effectiveness. Rodgers later apologized for the misleading statement about his vaccination status.

Seattle’s Russell Wilson also struggled in his return after missing three games with an injury to the middle finger on his throwing hand. He went 20 of 40 for 161 yards with two interceptions. The Seahawks wasted two scoring opportunities when Kevin King and Adrian Amos picked off Wilson passes in the end zone.