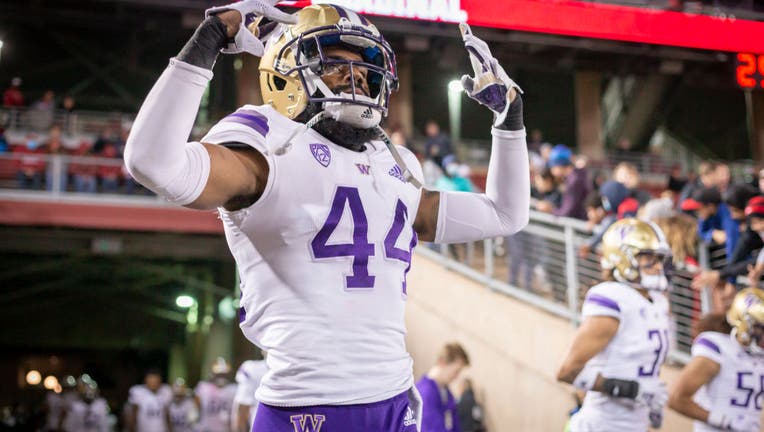 PALO ALTO, CA - OCTOBER 30: Brendan Radley-Hiles #44 of the Washington Huskies enters the stadium during an NCAA Pac-12 college football game against the Stanford Cardinal on October 30, 2021 at Stanford Stadium in Palo Alto, California. (Photo by Da

The calendar has flipped to November, signifying the final stretch of college football’s regular season.

The Pac-12 has started to sort itself out, with several teams in contention in each division and others already out of the mix.

Both divisions have frontrunners, but with this wild season there’s no telling how it might play out.

A look at the division races heading into the final month:

No. 7 Oregon has been the class of the conference and is the Pac-12′s lone chance to earn a spot in the College Football Playoff.

The Ducks (7-1, 4-1 Pac-12) shook off an overtime loss to Stanford to beat California, UCLA and Colorado in successive weeks. Oregon lost early enough in the season that if it runs the table and wins the Pac-12 Championship, it could earn the conference’s first CFP invite since Washington in 2017.

The Ducks were No. 4 in the initial CFP rankings, so they’re in a good position.

Oregon plays at Washington on Saturday, with games against Washington State, Utah and Oregon State closing out the regular season.

"There’s going to be hype and projections out there nonstop," Oregon coach Mario Cristobal said. "I think what you do is you take a step back and you make sure that you acknowledge that the players will come across that. They’ll acknowledge that. Then you make it as simple as if you don’t take care of your business on a day-by-day basis and then a week-by-week basis, what does it matter?"

All it will take is one Oregon slipup and a tight North race will get even tighter.

Washington State (5-4, 4-2) is just a half-game back of the Ducks and is coming off a lopsided win at Arizona State. The Nov. 13 game at Oregon could be a huge determiner of the North title.

Oregon State (5-3, 3-2), one of the Pac-12′s biggest surprises, is a game back of Oregon. The regular-season finale against the rival Ducks could be more massive than usual if the Beavers are still within reach of the North.

Washington (4-4, 3-2) has overcome some early-season struggles to remain in the North race, also a game back. The Huskies can take a huge step with a win at home against Oregon on Saturday.

The South has been a bit of a wild ride, with Utah, UCLA and Arizona State all looking like they would take charge of the division.

Right now, it’s the Utes (5-3, 4-1) in the driver’s seat, a game up on Arizona State and 1 1/2 games ahead of UCLA and USC. They’ve done it despite playing with heavy hearts after sophomore defensive back Aaron Lowe was shot and killed at a party after their game against Washington State on Sept. 26.

Utah has wins over all three teams directly behind it in the standings and plays at Stanford on Friday. The Utes close out the season with games against Arizona, Oregon and Colorado.

"Hopefully, we’re able to keep some of this momentum we’ve had," Utes coach Kyle Whittingham said.

The Utes can’t afford many slipups if they’re going to play in the Pac-12 Championship game for the second time in three years.

Arizona State (5-3, 3-2) is right behind Utah in the standings but a long way off in the momentum department.

Once in control of the Pac-12 South, the Sun Devils are reeling after consecutive ugly performances. Arizona State was outscored 28-0 in the second half of a 35-21 loss to Utah, then came out of its bye week and allowed Washington State to score the first 28 points in a 34-21 loss.

"Every week you have an opportunity to win a game," Arizona State coach Herm Edwards said. "The joy you feel, the accomplishment you feel as a football team to win. And we haven’t felt that."

UCLA (5-4, 3-3) was in a similar position to the Sun Devils before falling down the standings with consecutive losses.

The Bruins had a chance to track down Oregon in the closing seconds on Oct. 23, but threw an interception in the Ducks’ end of the field with 48 seconds left. UCLA lost 44-24 to Utah last week with quarterback Dorian Thompson-Robinson out with an injury.

The Bruins host Colorado on Saturday before closing out against USC and Cal.

USC (4-4, 3-3) has managed to keep itself in the South race despite coach Clay Helton’s firing two games into the season. The Trojans had a stretch of three losses in four games before beating Arizona last week. They play at Arizona State before closing out the regular season against Cal, UCLA and No. 17 BYU.