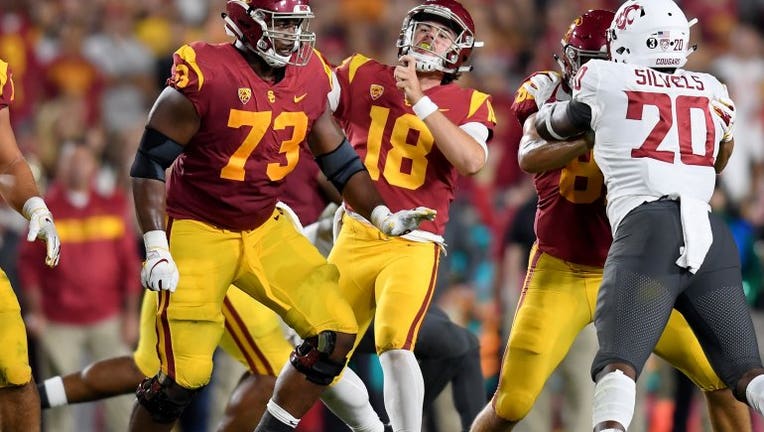 JT Daniels #18 of the USC Trojans passes during the second quarter against the Washington State Cougars at Los Angeles Memorial Coliseum on September 21, 2018 in Los Angeles, California. (Photo by Harry How/Getty Images)

The Pac-12 will make immediate changes to how video replay reviews are handled after Commissioner Larry Scott admitted procedural mistakes were made when a targeting foul was not called during last month's Washington State-Southern California game.

Scott responded Thursday to a report on the review by Yahoo Sports that cited an internal conference document . The document showed a replay official at the stadium believed he and officials working at the league's review command center had been overruled by a Pac-12 executive on a targeting call against Washington State linebacker Logan Tago on Sept. 21 at USC.

"We mixed administrative oversight and leadership with real-time replay-review calls, made by experts, on the field, in the stadium and in the command center," Scott said at Pac-12 basketball media day in San Francisco. "Moreover, we've allowed for ambiguity about who's got the final call and who makes the ultimate decisions in replay review."

The report said the replay official at the game and the command center agreed that, in addition to the roughing the passer foul that was called on the field, a targeting penalty should also be enforced. That would have resulted in the ejection of Tago. The report said a "third party" did not agree and the targeting call was removed.

Scott acknowledged the third party was Woodie Dixon, the Pac-12's general counsel and senior vice president of business affairs who also oversees football. Dixon and director of officials David Coleman oversee the command center though they are not necessarily there during games; Dixon often attends games on Saturdays.

"It was not his intention and he didn't believe he was making a decision, he believed he was trying to offer a point of view, angles on the call, trying to bring together consistency with other calls that he wanted our replay officials to consider in making the decisions," Scott said. "Having said that, it was clearly, from the replay official in the stadiums' perspective and other people's perspective, they clearly interpreted it as a decision or a directive. From my perspective that's enough. Even if it wasn't intended and I'm confident it wasn't intended as he's making the decision."

Scott said Dixon and Coleman will not be involved in any more discussion about calls being made at the replay review command center.

This is the second season the Pac-12 has used a replay review command center to assist on-field officials and in-stadium replay officials during conference games. The Southeastern Conference, Big 12 and Atlantic Coast Conference also use central review centers.

Scott said the Yahoo report was new information to him and he has since spoken with the individuals involved. He said the conference will do a "thorough" review of how replay review works.

The non-call on Tago was not even the most controversial of the Washington State-USC game. In the second half, USC linebacker Porter Gustin used the top of his helmet to hit Washington State quarterback Gardner Minshew on the side of his helmet. No flag was thrown on the field, and the replay officials, who can stop the game to review potential targeting fouls missed on the field, did not chime in.

Scott was asked about that call last month and said it was a "very, very close one."

The Pac-12, as with all conferences, does not make public its reviews and reports on game officiating from week to week. Scott said that is not likely to change, but he is concerned about any perception of lack of integrity with officiating.

"So I can't tell you whether there will be longer term changes or not, but I feel like this is the most significant step I can make now to acknowledge that we made a mistake in allowing the situation to develop, to allowing any shred of concern about integrity or ambiguity," he said. "I feel like it's my responsibility to make the most significant change I can make right now to lift any cloud that might exist even for the next games that we play starting Friday night."