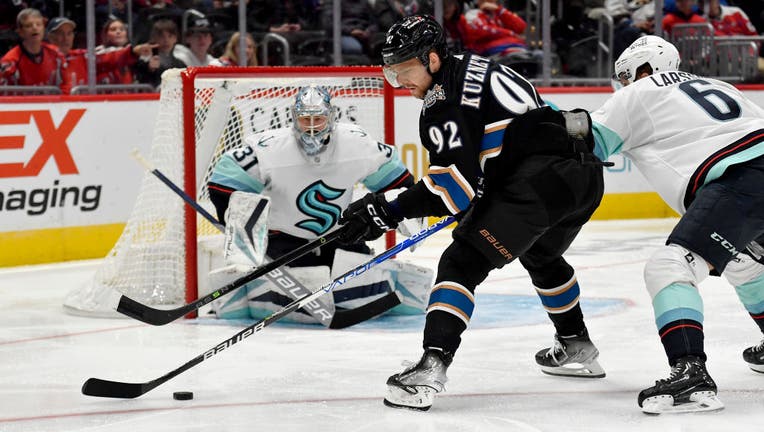 SEATTLE - Anthony Mantha and Alex Ovechkin each had a goal and assist and the Washington Capitals beat the Seattle Kraken 4-1 on Friday night.

Marcus Johansson and Lars Eller also scored and Charlie Lindgren stopped 25 shots as the Capitals won three games in a row for the first time this season. Eller and Ovechkin sealed the with empty-netters in the final 1:06, with Ovechkin’s marking his 796th career goal.

"We’ve just played amazing hockey," Lindgren said. "Honestly, I think it’s been fun to play goal for this team all year long, but especially last few games, we’ve been playing incredible. (We) can’t get complacent, we just got to keep fighting, keep long going to work."

The Kraken were outshot 12-6 in the first period but got on the scoreboard first as Larsson got his first goal in 20 games off a point shot through traffic with 2:09 left in the period for the Kraken’s lone goal. It marked the 18th time in 29 games this season the Capitals gave up the first goal of the game.

"Just go back to work. Tough stretches, they’re part of this," Kraken coach Dave Hakstol said. "You have stretches where you play well and things go your way. You have tough stretches on the schedule where you’ve got to just step up and go play good hockey. Our group is strong in the dressing room. Remain confident, do better than we did tonight."

After getting numerous high-danger chances, Washington finally tied it at 5:20 of the second as Mantha knocked in the rebound of Matt Irwin’s shot, putting it off Jamie Oleksiak’s skate and in. It was Mantha’s seventh goal of the season and first in four games.

"Everyone was fired up... it’s just a big win and big points for our team right now," Mantha said.

Shortly after recording his first NHL assist on Mantha’s goal, Alex Alexeyev left the game after taking an elbow to the head from Oleksiak, who received a match penalty. The Capitals went on a 5-minute power play and Johansson scored his sixth to give Washington the 2-1 lead with 6:45 left in the middle period.

F Tom Wilson joined the Capitals on the ice for the first time this season at their morning skate on Friday. ... Seattle’s Shane Wright reported to Team Canada for the World Junior Championships. ... The Capitals’ Darcy Kuemper and Martin Fehervary missed their third straight game with upper-body injuries while Dmitry Orlov has now missed 15 straight. ... Kraken C Karson Kulhman got an assist for his first point since Oct. 23 (seven games). ... Ovechkin now has 15 points in his last 11 games.

Kraken: At Florida on Sunday as they continue a four-game trip.

Capitals: At Winnipeg on Sunday for the first of two meetings this season.