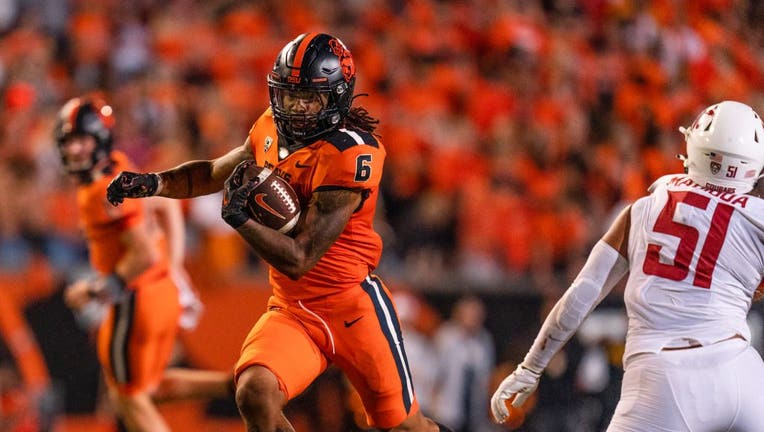 CORVALLIS, OR - OCTOBER 15: Running back Damien Martinez #6 of the Oregon State Beavers carries the ball during the second half of the game against the Washington State Cougars at Reser Stadium on October 15, 2022 in Corvallis, Oregon. Oregon State w

CORVALLIS, Ore. - With Ben Gulbranson making his second career start at quarterback for Oregon State on Saturday night, the Beavers relied heavily on their running game and defense in a 24-10 victory over Washington State.

The Cougars relied almost exclusively on the arm of quarterback Cameron Ward, who threw 54 passes in the game.

A 50-yard run off left tackle by Damien Martinez to the 4-yard line late in the third quarter set up Colletto’s 2-yard touchdown run on the first play of the fourth quarter, giving the Beavers a 24-10 lead.

Trailing by 14 points with six minutes remaining, Ward was forced out of the pocket on fourth-and-8 from the Cougars’ 37-yard line and his desperation heave fell incomplete.

Oregon State missed a 31-yard field goal with about three minutes left that would have made it a three-score game, but the Beavers defense sealed the win.

The teams traded touchdowns in the third quarter.

Midway through the third quarter Gulbranson rolled to his left and threw into the end zone to wide receiver Anthony Gould, who leaped high in the air and came down with a 17-yard touchdown catch, increasing the Beavers’ lead to 17-3.

Back came the Cougars.

Ward completed five of six passes on an 80-yard touchdown drive, culminated by a 9-yard touchdown toss to running back Jaylen Jenkins that cut the Beavers’ lead to 17-10 at 4:15 of the third quarter.

Silas Bolden ran the game’s opening kickoff back 60 yards to set up Oregon State’s first touchdown. Colletto, operating out of the wildcat formation, scored on a 1-yard run to give the Beavers a lead they would not relinquish.

Washington State ran just six offensive plays for one yard in the first quarter. The Cougars were more effective offensively in the second quarter, but still trailed 10-3 at halftime.

The second quarter was a struggle for Gulbranson, who didn’t complete a pass as the Beavers managed just two first downs.

Washington State: The Cougars didn’t generate enough offense to avoid the loss. Ward continues to flash big-play capability, but the Cougars couldn’t generate a consistent running game and were too one-dimensional.

Oregon State: The Beavers were understandably conservative in their offensive approach and leaned on the running game. Martinez’s 50-yard run late in the third quarter was one of the key plays in the game. Oregon State’s three-back rotation of Martinez, Deshaun Fenwick and Jam Griffin continues to produce. Gulbranson had one touchdown pass and one interception.

Former Oregon State wide receiver Mike Hass, the 2005 Biletnikoff Award winner, was honored during an on-field ceremony in the first quarter. Hass will be inducted into the College Football Hall of Fame in December.

Oregon State quarterback Chance Nolan was in concussion protocol this week and missed his second consecutive game. Nolan, who was injured in the first quarter of the Utah game October 1, had made 19 consecutive starts before the injury.