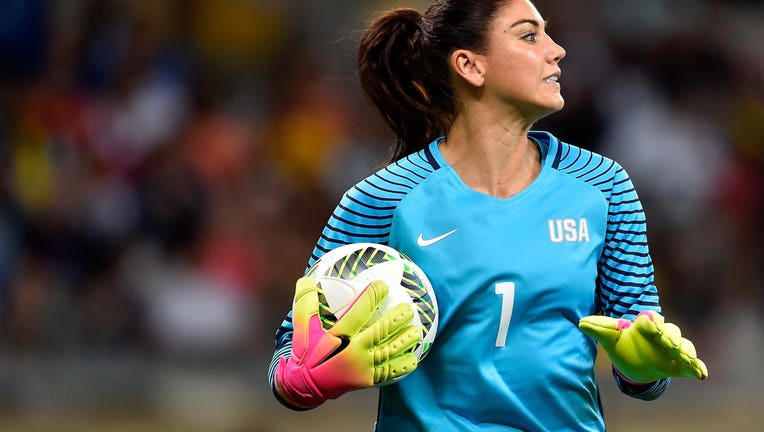 Hope Solo #1 of United States looks on during the Women's Group G first round match between the United States and New Zealand during the Rio 2016 Olympic Games at Mineirao Stadium on August 3, 2016 in Belo Horizonte, Brazil. (Photo by Pedro Vilela/Ge

BELO HORIZONTE, Brazil -- Hope Solo says she was not bothered by fans who chanted ‘‘Zika, Zika’’ at her as the US women’s soccer team defeated New Zealand in its Olympic debut on Wednesday.

The crowd of nearly 10,000 fans at the 60,000-capacity Mineirao Stadium jeered the goalkeeper with the reference to the virus that has scared many athletes ahead of the Rio Games.

Solo upset some Brazilians before coming to the Olympics by tweeting a photo of herself wearing a hat with mosquito netting. She also posted a photo of dozens of packs of mosquito repellent that she was packing for her trip to Brazil.

The veteran goalkeeper said she didn’t realize during the game that the fans were chanting ‘‘Zika,’’ and thought they were only yelling a homophobic slur that local clubs sometimes use against goalkeepers at goal kicks.

Some of the fans were indeed yelling the homophobic slur early in the game, but later the majority of the crowd started with the ‘‘Zika’’ chant, which was also repeated after the final whistle.

‘‘I think that’s something hopefully they will put behind them and realize that Hope has apologized to the Brazilian people,’’ US coach Jill Ellis said of the fans. ‘‘Sometimes mistakes are made. We are used to getting booed in other countries, so that part of it is not foreign. I hope the Brazilian people appreciate what we are trying to do with the ball and move past that.’’