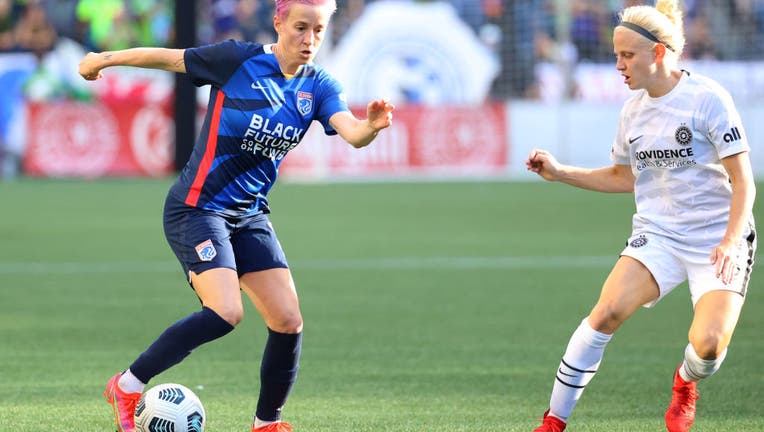 TACOMA, WASHINGTON - AUGUST 29: Megan Rapinoe #15 of OL Reign controls the ball against Madison Pogarch #15 of Portland Thorns FC in the second half at Lumen Field on August 29, 2021 in Seattle, Washington. (Photo by Abbie Parr/Getty Images)

The matchup between the Northwest rivals was part of a doubleheader with the Seattle Sounders and Portland Timbers meeting in the nightcap at Lumen Field.

The crowd broke the mark of 25,218 for a 2019 match between the Thorns and North Carolina Courage in Portland.

Those who showed up for the first-time event were treated to an entertaining match and the biggest star on the field coming through for the Reign.

Rapinoe scored in the 16th minute off a pass from Jess Fishlock on a quick counter attack. She added a second goal on a penalty kick in the 40th minute. Rapinoe missed several chances at a possible hat trick, including a wide open header in the 60th minute that went wide of the net.

Fishlock celebrated the victory by emphatically dropping a bouquet of roses on the turf after the final whistle.

Portland’s Angela Salem scored off a free kick in first-half stoppage time for the Thorns’ only goal. OL Reign goalkeeper Sarah Bouhaddi made a key save on Portland’s Morgan Weaver in the 80th minute to maintain the lead.

Portland had been unbeaten in its previous 10 games.