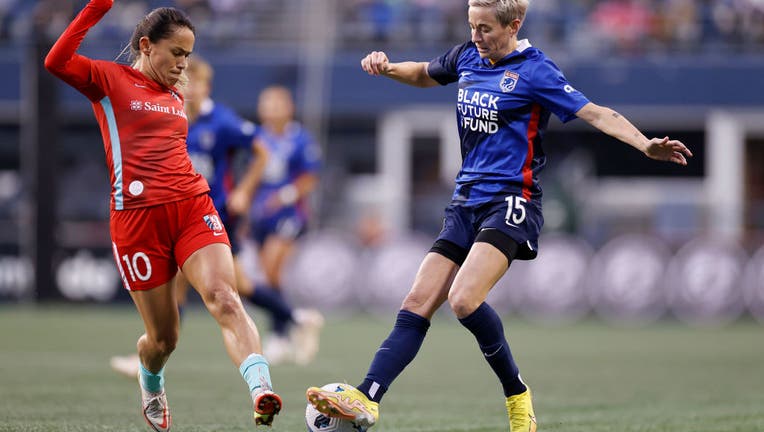 SEATTLE, WASHINGTON - OCTOBER 23: Lo'eau LaBonta #10 of Kansas City and Megan Rapinoe #15 of OL Reign battle for the ball during the second half in a NWSL semifinal match at Lumen Field on October 23, 2022 in Seattle, Washington. (Photo by Steph Cham

Alexis Loera and Kristen Hamilton scored in the Kansas City Current’s 2-0 victory over the top-seeded OL Reign, winners of this season’s Supporters Shield.

The match happened in front of a record crowd of 21, 491 fans at Seattle's Lumen Field on Sunday.

Loera scored for the Current three minutes into the match. Hamilton added a goal in the 63rd to stun the Reign. It was Current goalkeeper Adrianna Franch’s third career playoff shutout.

It’s been quite the journey for Kansas City, which finished at the bottom of the league last season.

"You can just tell from our development over the course of the season that we’re in a really good spot where we’re not quite at the top, but we’re peaking at the times we need to be peaking," Franch said. "Our team is just freaking phenomenal."

On Friday, the OL Reign hoisted the team's flag at the top of Seattle's iconic Space Needle for the first time ever.

The Portland Thorns will play the Current for the National Women’s Soccer League championship next weekend in Washington, D.C., closing out a turbulent and emotionally taxing 10th season.

Crystal Dunn came off the bench and scored in stoppage time to give the Thorns a 2-1 victory over the San Diego Wave at Portland’s Providence Park in the first of two semifinal matches on Sunday.

Dunn, who also plays for the U.S. national team, has been easing her way back after giving birth to a son five months ago. Her first goal since returning came off a corner about three minutes into stoppage time.

OL Reign's Goalie finds passion both on the field, and underwater

On the field Phallon Tullis-Joyce is a star goaltender, on her days off she's chasing her other dream: marine biology.

The semifinals were played amid continuing fallout over an investigation that found systemic misconduct and abuse across the league.

Yates’ devastating report came out earlier this month. In it, she detailed the Thorns’ handling of harassment and sexual coercion allegations leveled at former coach Paul Riley.

Riley coached Portland in 2014-15. Two former players, Mana Shim and Sinead Farrelly, accused Riley of misconduct last year in a report in The Athletic. After the release of the Yates investigation, two Thorns executives were fired.

The announced crowd was 22,030 at Providence Park. Fans came out in support of the players but there have been calls for Thorns owner Merritt Paulson to sell the team.

"The players needed it. They needed to see that they’re loved," Thorns coach Rhian Wilkinson said.