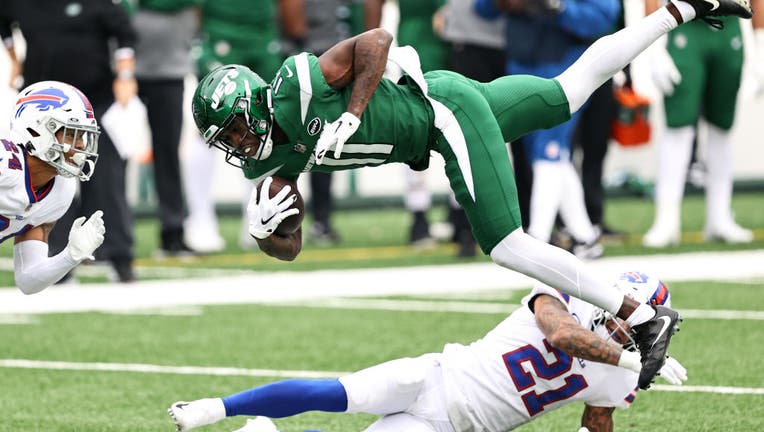 EAST RUTHERFORD, NEW JERSEY - OCTOBER 25: Jordan Poyer #21 of the Buffalo Bills tackles Denzel Mims #11 of the New York Jets in the second quarter of the game at MetLife Stadium on October 25, 2020 in East Rutherford, New Jersey. (Photo by Elsa/Getty

Gase wouldn’t detail the situation involving Mims on Wednesday since it’s a personal matter, but it is believed the receiver could need to travel home to Texas to handle a family matter.

Because Mims would then need to go through the NFL’s extensive COVID-19 protocols before being allowed back into the team’s facility, that could prevent him from being fully cleared before the game against the Seahawks.

“He’s possibly going to be out of the protocol here,” Gase said. “We’ll see how today goes, but there’s a possibility that that could throw him out of the game.”

When asked to clarify if Mims was currently in the COVID-19 protocol, Gase said the receiver was, “but at the end of the day, he might not be.”

Mims, the team’s second-round draft pick in April, has been a bright spot in the second half of the season. He missed the first six games while recovering from hamstring issues, but has 19 catches for 324 yards in the six games since. Mims has at least one catch of 20 or more yards in five straight games, with only Chicago’s Allen Robinson (10), Atlanta’s Julio Jones (six) and Washington’s Terry McLaurin (six) having longer active streaks.

Running back Frank Gore was expected to be limited after leaving the game last Sunday against Las Vegas with a concussion.

“That’s a good first step,” Gase said. “Whatever all those steps are that they have to go through, he’s going through. So today he’s allowed to participate in practice, so that’s a plus.”