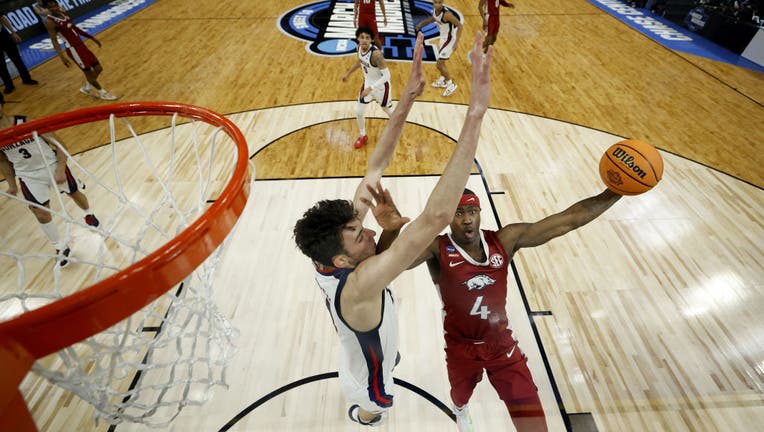 SAN FRANCISCO, CALIFORNIA - MARCH 24: Davonte Davis #4 of the Arkansas Razorbacks shoots the ball around Chet Holmgren #34 of the Gonzaga Bulldogs during the first half in the Sweet Sixteen round game of the 2022 NCAA Men's Basketball Tournament at C

JD Notae scored 21 points despite missing 20 shots and fourth-seeded Arkansas made Gonzaga miserable on both ends of the floor, bouncing the top overall seed from the NCAA Tournament with a 74-68 win on Thursday night.

Notae finished with six rebounds, six assists, three steals and two blocked shots for coach Eric Musselman’s scrappy, hustling Razorbacks (28-8), who reached the Elite Eight for the second straight year and will face either Duke or Texas Tech in the West Region final on Saturday.

Drew Timme scored 25 points but couldn’t rally the Bulldogs (28-4), who for the second straight season were favored to win that elusive national title but were eliminated by a more physical foe. Coach Mark Few’s squad was undefeated last year before falling to Baylor in the national title game.

Arkansas continually challenged 7-foot Gonzaga freshman Chet Holmgren in the paint, and the skinny NBA prospect fouled out with 3:29 remaining after some questionable calls went against him. Holmgren finished with 11 points, all in the second half, and 14 rebounds in what may be his final college game.

Moments after Au’Diese Toney dunked with 1 second left, Notae threw the game ball into the air in triumph as teammate Jaylin Williams flexed and roared near midcourt. Musselman, meanwhile, found mother Kris in the stands for an embrace as she watched him in person coaching the Razorbacks for the first time. 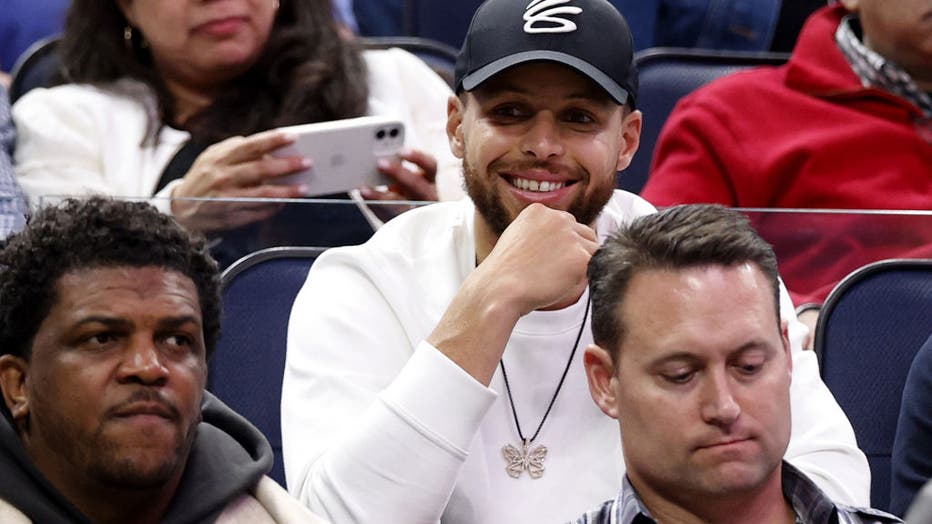 SAN FRANCISCO, CALIFORNIA - MARCH 24: NBA player Stephen Curry of the Golden State Warriors looks on during the second half of the Sweet Sixteen round game between the Gonzaga Bulldogs and the Arkansas Razorbacks in the 2022 NCAA Men's Basketball Tou

Moments after Au’Diese Toney dunked with 1 second left, Notae threw the game ball into the air in triumph as teammate Jaylin Williams flexed and roared near midcourt. Musselman, meanwhile, found mother Kris in the stands for an embrace as she watched him in person coaching the Razorbacks for the first time.

The Hogs earned their first ever win against a No. 1 team in the NCAA Tournament.

Arkansas had been 0-5 all-time against the nation’s top-ranked team and 2-11 overall, with one of those wins coming this season. The Razorbacks beat then-No. 1 Auburn 76-73 in overtime on Feb. 8.

Arkansas: Musselman coached both the NBA’s Golden State Warriors and Sacramento Kings in the 2000s, so this was a homecoming of sorts. His mother flew in from San Diego. ... Hogs assistant Keith Smart also coached with both franchises. ... Arkansas missed its initial four 3-point tries before Wade hit from deep at the 10:36 mark of the first half. ... The Razorbacks lost to eventual champion Baylor in last year’s Elite Eight. ... Arkansas improved to 8-5 in Sweet 16 games.

Gonzaga: The Zags committed 15 turnovers, resulting in 10 Arkansas points. ... Gonzaga’s seven straight Sweet 16s is longest active run to this round. ... The Zags won the only previous meeting between the schools, 91-81 at the Maui Invitational in November 2013.