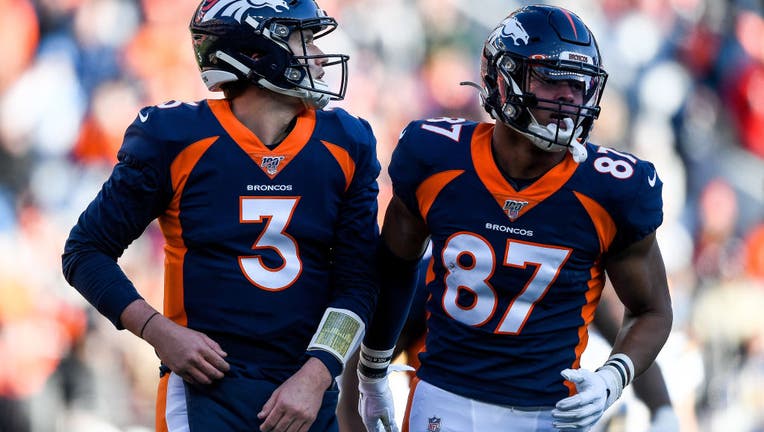 DENVER, CO - DECEMBER 1: Drew Lock #3 and Noah Fant #87 of the Denver Broncos run off the field after an offensive series against the Los Angeles Chargers in the first quarter of a game at Empower Field at Mile High on December 1, 2019 in Denver, Col

New Seattle Seahawks tight end Noah Fant says that Drew Lock has all the ability needed to be a top quarterback in the NFL.

After having Russell Wilson as the quarterback of the Seahawks for the last 10 seasons, uncertainty now lingers over the position as the team enters the post-Wilson era. Fant has played the last three seasons alongside Drew Lock with the Denver Broncos and believes that Lock has the requisite tools necessary to succeed in the NFL.

"I think Drew's biggest attribute is his arm, man. He's made some insane throws in the time that we've played together. He has all the talent in the world. He can run with the ball. He can do it all," Fant said on Tuesday.

"He's been through some things with previous things in Denver, and he's been working through that, and I think he has all the opportunity, all the talent in the world to get it done and be that franchise guy. I know he's excited to get in and get to work and meet all the guys, so I think it'll be a really good opportunity for him."

Lock, Fant, and defensive lineman Shelby Harris were traded to Seattle by the Broncos as a part of the package that landed them Wilson last month. Lock is the current favorite to be the starter for Seattle when the season opens in September. However, many things can alter that discussion between now and then. Head coach Pete Carroll said the team still wants to re-sign Geno Smith to join Lock and Jacob Eason at the position. A rookie selected in the NFL Draft is a possibility as well.

Lock completed 64.1 percent of his passes for 1,020 yards with seven touchdowns and three interceptions in five starts as a rookie in Denver. That success is what the Seahawks have pointed to as a basis for their belief in Lock's unrealized potential. It also came under offensive coordinator Rich Scangarello, who left the team after the one season working with Lock.

Lock hasn't approached that success since. He had a league-worst 15 interceptions in 13 games as a starter in 2020. He was then relegated to backup duty behind Teddy Bridgewater last year.

Lock said last month that the Seahawks haven't promised him anything when it comes to being the starting quarterback for the team.

Drew Lock: Nothing promised from Seahawks, excited for fresh start

Seattle Seahawks quarterback Drew Lock said he hasn't been promised anything from his new team in regard to being the starting quarterback this fall. Lock said that's exactly the way he wants it and intends to go compete for the job in Seattle.

While Lock has been uneven in his play through three seasons, Fant said he knows Lock is excited by the opportunity that lays ahead for him in Seattle.

"I think Drew is a great candidate and a great leader," Fant said. "He's a young guy, will be able to relate to young guys very well. I think he holds himself well in the locker room, constantly wants to work, constantly wants to get better. He's just got that fire in him, man. He's ready to take the bull by the horns and get to it."